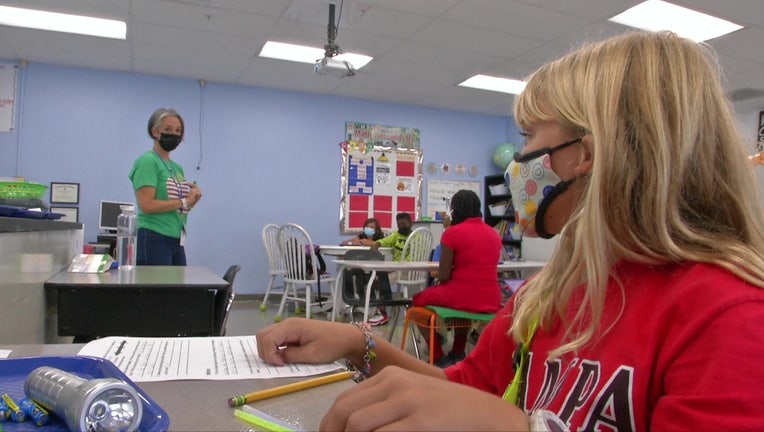 Eight school boards face state financial penalties because of decisions to enact mask mandates amid the COVID-19 pandemic. Those penalties target amounts of money equal to board member salaries.

The State Board of Education approved imposing the financial penalties, relying on a Sept. 22 emergency rule from the Florida Department of Health that said decisions to opt out of mask requirements are at the "sole discretion" of parents or guardians. The health department’s rule was designed to carry out a July 30 executive order by Gov. Ron DeSantis that sought to prevent mask requirements.

Ian Rosenblum, deputy assistant secretary for policy and programs for the U.S. Department of Education, sent a letter Monday to state Education Commissioner Richard Corcoran to try to stave off an attempt to prevent federal grant funds from making up state money lost by the school boards.

The U.S. Department of Education on Sept. 23 awarded $150,000 to Alachua County to cover the salaries of four school board members, and days later provided $420,000 to backfill salaries for eight Broward County board members.

The federal funding was awarded through a grant program titled Project SAFE, or Supporting America’s Families and Educators.

During an Oct. 7 meeting of the State Board of Education, Corcoran characterized the grants as an attempt by the federal government to "buy off school districts" and to "neutralize and abolish" the state board’s enforcement authority.

As part of the penalties, Corcoran recommended withholding state money to the eight districts in amounts equal to any federal funding they receive.

But Rosenblum pointed to a section of a federal education law that says states "shall not take into consideration payments under this act ... in determining ... the amount of state aid, with respect to free public education of children."

"If FLDOE (the Florida Department of Education) moves forward with its planned reduction of state aid to Alachua and Broward, the (federal) department is prepared to initiate enforcement action to stop these impermissible state actions," Rosenblum wrote.

At least one district whose school board has had salaries threatened by the state has dropped its student mask requirement, as a summer surge in coronavirus cases has died down in recent weeks.

The Brevard County schools on Friday announced the county had reached a benchmark in local cases that would trigger a repeal of its mask policy.

The district published a notice on its website that said the county reached a reduced level of 50 COVID-19 cases per 100,000 people and that the district would allow for parental opt-outs of the mask requirement. It included in the notice an opt-out form that does not require documented medical reasons for exemptions.

"This is exactly how the mask mandate was supposed to be used," School Board Chairwoman Misty Belford said in a statement. "The goal was to protect the health of our students and staff."

Alachua County on Oct. 19 relaxed its student mask requirement to allow parents of high school students to opt out, but students in kindergarten through eighth grade will be required to wear masks for the next three weeks.

Broward County is keeping its student mask requirement in place despite threats from the state. The district requires students in all schools to wear masks in schools and on school buses.

Meanwhile, an administrative law judge is expected to issue a decision by Nov. 5 in a challenge by six school boards, including Broward and Alachua, to the state Department of Health’s rule aimed at preventing student mask requirements.