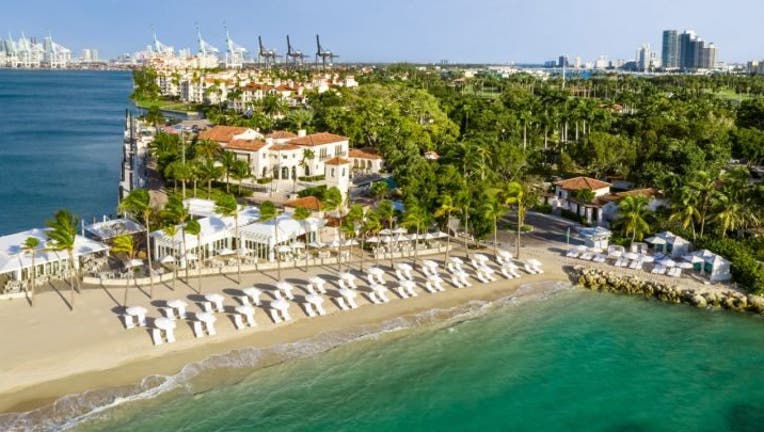 MIAMI, Fla. - Florida’s two biggest counties joined the rest of the state on Monday in reopening nonessential businesses and restaurants after widespread coronavirus closures, but areas popular among visitors maintained restrictions as a precaution.

In the rest of the state, Florida allowed restaurants and shops to expand their capacity on Monday from 25% to 50%. The state also allowed gyms, libraries and museums to reopen at limited capacity.

Residents started to take steps back toward normalcy, with barbershops making their first snips in weeks, cafe owners handling lunch rushes and fitness centers trying to figure out how to accommodate the new rules.

RELATED: Lunch crowds return as restaurants allowed to increase capacity to 50% across Flordia

“As you can imagine, there are a lot of people desperate to no longer look like a caveman,” said Ricky Patel, who runs a barbershop in the Miami suburb of Doral. He said he was stricly enforcing appointments and extending his ours so that only five customers were allowed inside the business at a time.

In other commercial districts, restaurant owners said they were encouraging reservations for people looking to finally dine out, but also seeing many walk-ins despite the drizzly weather in South Florida.

The problem with tracking whether measures to limit the spread of COVID-19 are working is that there's a lag time of days to weeks between when someone&nbsp;is exposed to the disease and when they show symptoms -- and then when those people get tested and their test results are reported.

In South Miami, Jan Jorgensen, owner of a restaurant called Two Chefs, said he was receiving meats and produce ahead of the first dinner since officials ordered all dining stablishments to close on March 17. He expected between 10 and 15 guests the first night.

“We are keeping tables empty as blockades, so our 6-feet apart rule is more like 10 feet apart,” he said. “We are taking every precaution we can in order to make everything right.”

Jorgensen said the extended closure gave him an opportunity for the restaurant to repaint the walls, rennovate the space, update the menus and fully disinfect.

“Many states throughout the country, they stopped all construction. They stopped manufacturing as well. I think that was a big mistake. We did not do that in Florida. We kept construction going,” DeSantis told reporters gathered near an Interstate 4 interchange where new highway ramps were opening.

He said more than 40 projects were accelerated, saving more than 650 total contract days.

RELATED: Is it working? Results of Florida's phased reopening plan will be in the numbers

Florida has had more than 45,000 confirmed cases of coronavirus resulting in nearly 2,000 deaths, according to statistics provided by the state.

Miami-Dade County Mayor Carlos Gimenez expressed frustration on Monday that some of the largest municipalities within the county as the city of Miami, Hialeah and Miami Beach decided to delay their reopening, creating confusion among residents and business owners who travel within municipalities.

“We allow things to happen in the cities and then the cities can be more restrictive if they want to. Do I want more consistency? Yes,” Gimenez said.

The next two items on Florida’s agenda to restart the economy and boost the morale are sports and theme parks.

DeSantis said the state is ready to allow professional sports to start holding games, and even extended a welcome for teams to come if their home states won’t let them compete. He has previously said that spectators wouldn’t be allowed, but games would be broadcast for people to watch on TV.

Several shopping areas on theme park-property have already opened at Universal CityWalk, and Disney Springs is scheduled to open Wednesday with mask requirements in place for employees and visitors. But DeSantis has been encouraging theme parks that draw millions of visitors from other states and countries to submit reopening plans.

“I’m not saying this is going to happen tomorrow,” he said. “I think you’ve already seen some theme parks in other parts of the world open, and I know we are going to get that done here.”