HAINES CITY, Fla. - Police in Haines City are searching for a woman who faces multiple charges for allegedly driving head-on into a garbage truck, causing an unrestrained child in her car to be injured.

Haines City police say 34-year-old Taquire Studimire drove her 2008 Honda Civic into the front of a garbage truck in the area of North 14 Street and Stuart Avenue around 8:30 a.m. Monday.

The driver of the truck told investigators he honked his horn in an attempt to avoid being hit, but to no avail. 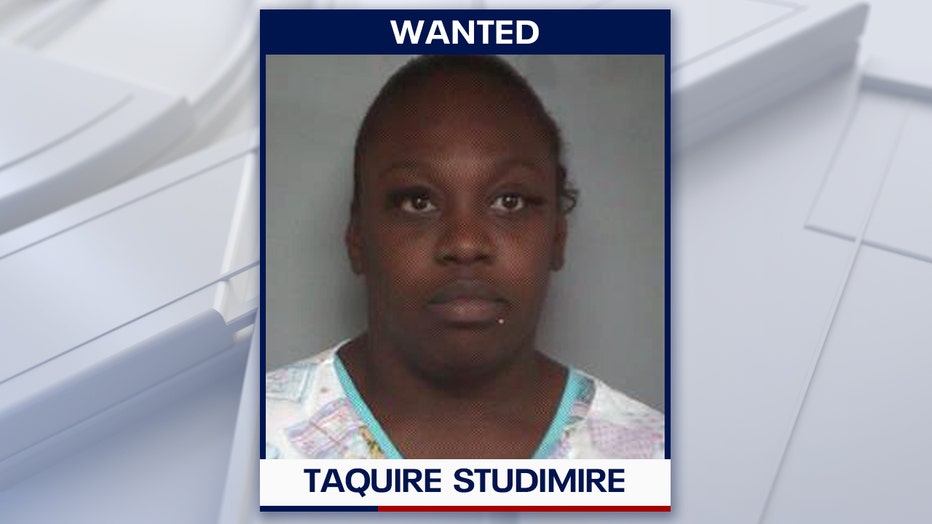 Police said Studimire then got out of her car with a young child in her arms, and told the truck driver he was at fault for the crash.

The garbage truck's dash camera captured the collision, showing the child sitting unrestrained in the front seat and being thrown into the dash as the vehicles crashed.

Police said the video then shows Studimire grabbing the child from the floorboard and immediately exiting the car to confront the truck driver.

"At no point was she ever seen taking time to examine the child for potential injury," police said.

Investigators said after Studimire confronted the truck driver, she then got back in her car and backed into traffic with the driver's side door open, nearly striking another vehicle.

RELATED: ‘Didn’t care if he survived’: All suspects arrested after FWC officer was run over by ATV

The child was later located at a daycare facility with a head bruise and a swollen cheek. The child was transported to a hospital for treatment and to check for any other injuries. Police said the child did not suffer any serious injuries in the crash.

"The blatant disregard shown for this child is appalling," Police Chief Jim Elensky said. "She proceeded to put others in danger with her carelessness and has taken no responsibility for her actions. Perhaps jail time is what she needs to mull it over. It is fortunate that no one was seriously hurt."

There is a warrant for Studimire's arrest. Officers made contact with her by phone but have not yet been able to locate her. She faces charges of child abuse, tampering, reckless driving, hit and run and resisting arrest without violence.

Anyone with information on Studimire's whereabouts is asked to contact the Haines City Police Department at 863-421-3636.