NOAA's hurricane hunter pilots ready to fly into the storm

LAKELAND, Fla. - Every hurricane season, a group of brave pilots and scientists heads into storms to collect the data needed to create forecasts and keep people safe – and it all starts at Lakeland Linder International Airport.

It was back in 2017 when they moved their headquarters from MacDill Air Force Base to its current location. The aircraft are based at NOAA’s Aircraft Operations Center, which is about 106,000 square feet, fitting nine planes and over 100 people.

"We just finished up a $13-million expansion for them as they are going to add new airplanes and more people here to the facility," explained Eugene Conrad, the airport director. "We are super fortunate to have these dedicated individuals."

"You should see them during the hurricane season," he added. "The tempo they have to maintain to fly these storms for weeks on end, it’s impressive. They are awesome."

The AOC includes civilians and officers of the NOAA Corps, one of the country’s seven uniformed services.

"We owe a huge debt to those folks who fly in those storms because they give us information that we would never get," said FOX 13’s meteorologist Dave Osterberg. 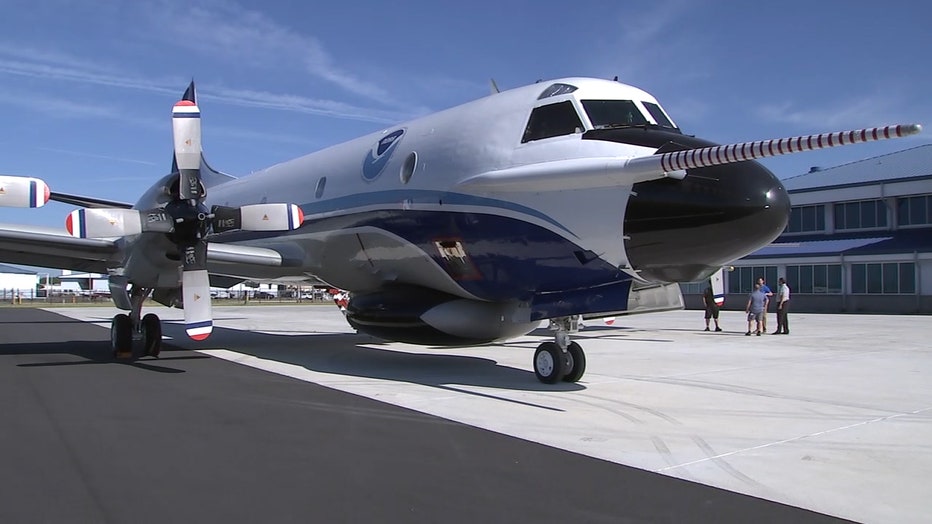 During their missions, the scientists use instruments to measure the pressure, humidity, temperature, wind direction, and speed of a threatening tropical system in order to receive real-time data.

They continue to experiment with automated drones, which help paint a much more complete picture of what's happening inside a storm.

The thought of flying through a major hurricane could sound terrifying to some, but for Lt. Com. Adam Abitbol, it's all in a day's work.  He is one of those Hurricane Hunters who is on standby as hurricane season returns.

"I would call it really exciting, really fun. It's adventurous. The team that goes in there, we love doing it together," he said. "I think that's the best part of the job, getting to do with the team up in the plane."

Lt. Com. Abitbol said the team is in addition to the data retrieved by satellites and buoys.

"Our team gets together…when the National Hurricane Center deems that as necessary to check out a storm either for research purposes or forecast tracking. Anywhere from 8 to 14 of us will get on this plane. We'll do as many passes as necessary in the storm to collect the data,' he explained. "We'll pass that data almost in real-time to the Hurricane Center in Miami."

"Certainly what we do is important," he added, "and we all know that."