Gov. DeSantis in the center of the border debate

As he defended sending migrants to "sanctuary jurisdictions," Gov. Ron DeSantis on Tuesday was hit with a potential class-action lawsuit that alleged Venezuelan migrants were lured with false promises to fly last week from Texas to Martha’s Vineyard in Massachusetts.

TALLAHASSEE, Fla. - Lawyers representing asylum seekers who were allegedly "tricked" into going from Texas to Martha’s Vineyard on flights funded by Gov. Ron DeSantis’ administration said Wednesday they are seeking a nationwide injunction to block the governor from luring immigrants to travel across state lines.

State records show the Florida Department of Transportation has paid Oregon-based Vertol Systems Company Inc., which has an operation in Destin, more than $1.5 million for "relocation of unauthorized aliens."

The relocation of the immigrants has drawn international attention. On Tuesday, lawyers representing some of the asylum seekers flown to Massachusetts filed a potential class-action lawsuit against DeSantis, Florida Department of Transportation Secretary Jared Perdue and unidentified people who helped recruit the immigrants in Texas.

The legal challenge, filed by attorneys with the Massachusetts-based Lawyers for Civil Rights, seeks unspecified monetary damages and asks a judge to block the DeSantis administration from "inducing immigrants to travel across state lines by fraud and misrepresentation."

Two planes filled with migrants were sent from Florida to Martha's Vineyard on Sept. 14, 2022. Gov. Ron DeSantis' spokesperson said it was "part of the state’s relocation program to transport illegal immigrants to sanctuary destinations."

Iván Espinoza-Madrigal, executive director of Lawyers for Civil Rights, told reporters Wednesday that his organization also requested anonymity for the immigrants because they have received "a barrage of hate messages and death threats" as they try to recover from daunting journeys to the U.S. and subsequent trauma from their relocation to the Northeast.

The lawsuit is "the first of its kind in the nation," Espinoza-Madrigal, a lawyer, said. The plaintiffs’ lawyers are representing "all similarly stranded migrants across the country who have been fraudulently induced" by DeSantis, he added.

"We understand that there are other people affected, which is why this was filed as a class action to stop DeSantis and Florida from doing this via plane or bus, in terms of tricking people, deceiving people, lying to people about where they’re going and what they will receive at the other end. That has got to stop," Espinoza-Madrigal said.

The lawsuit alleges the defendants "made false promises and false representations" that the immigrants "would receive employment, housing, educational opportunities, and other like assistance" upon their arrival in Massachusetts.

In Texas, the immigrants were given items such as $10 McDonald’s gift cards and promised "free shoes" if they would agree to take the flights, with many of the people not understanding where they were going, according to the allegations. The immigrants were placed in a hotel for several days before boarding two charter planes on Sept. 14.

"We are dealing with an unprecedented situation. Never before have immigrants been endangered in this way," Espinoza-Madrigal said during a video conference with reporters. "If the Martha’s Vineyard community wouldn’t have acted so quickly and embraced them and protected them, things could have turned out very differently. … We’re talking about a group of highly vulnerable immigrants."

The lawsuit alleges the immigrants, who are mostly from Venezuela, were in the country legally while awaiting processing by federal authorities.

After arriving in Texas, the immigrants had surrendered themselves to federal officials, been "screened and processed" and were "under federal management" while awaiting supervision appointments, check-ins and hearings, according to Espinoza-Madrigal. Many of them had been granted what is known as "humanitarian parole," which allows people to remain in the U.S. temporarily.

Recruiters for the flights gave the immigrants official-looking documents "placed in shiny red folders" that resembled "an informational or welcome package," but included incorrect information about the immigration process, Espinoza-Madrigal said. Many of the immigrants were ineligible for the services and benefits outlined in the documents.

He told reporters that recruiters "deliberately targeted" migrants, who were asked to "show their papers," based on their national origin and race. The migrants from Venezuela were trying to escape the socialist Maduro regime.

"The transportation of the immigrants to Martha’s Vineyard was done on a voluntary basis," Fenske said. "The immigrants were homeless, hungry, and abandoned — and these activists didn’t care about them then. Florida’s program gave them a fresh start in a sanctuary state and these individuals opted to take advantage of chartered flights to Massachusetts." 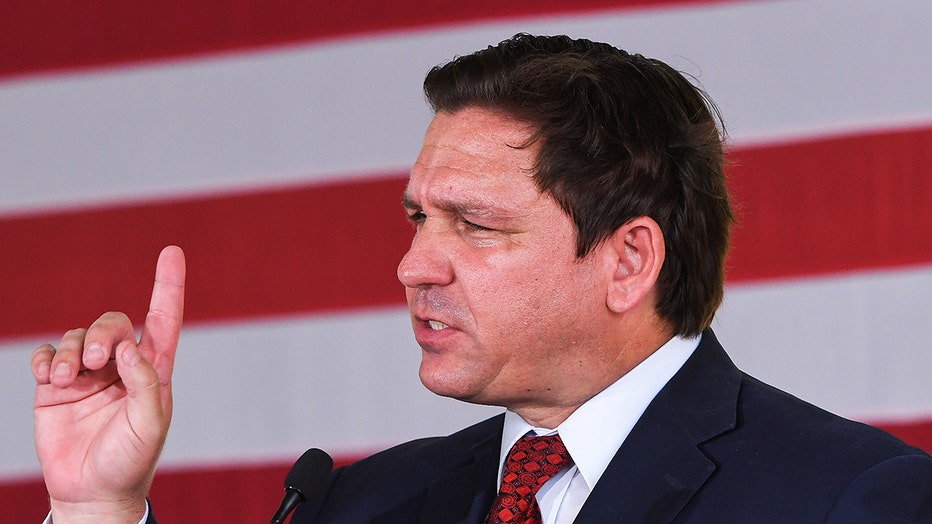 DeSantis, who is running for re-election this year and is widely viewed as a frontrunner for the 2024 Republican presidential nomination, earlier Tuesday also defended the decision to transport migrants to "sanctuary" communities and criticized federal immigration policies. The governor reiterated that he thinks President Joe Biden should reinstate policies used by former President Donald Trump, such as a requirement for asylum seekers to remain in Mexico.

"Short of that, if you believe in open borders, then it’s the sanctuary jurisdictions that should have to bear the brunt of the open borders," DeSantis said during an appearance in Bradenton.

DeSantis’ aides did not respond to questions about Monday’s $900,000 payment to Vertol.

The flights to Massachusetts came as Republican governors in Texas and Arizona have bused thousands of immigrants to northern locales to call attention to the situation at the U.S.-Mexico border.

When asked why last week’s flights triggered the lawsuit, Alianza Americas Executive Director Oscar Chacón pointed to the circumstances surrounding the immigrants in San Antonio. Alianza Americas is a plaintiff in the federal lawsuit.

"Clearly, the event of the plane getting into Martha’s Vineyard, with people truly being tricked as to where they were going --- nobody really knew where exactly they were going to," Chacón told reporters. "I think it’s an opportunity of condensed, if you want, cases of abuse that could be documented, and I think that’s what made these particular cases stand out, compared to the number of buses that have arrived in Washington, D.C., New York City, Chicago, in particular."