The Florida Fish and Wildlife Conservation Commission said even though there are low levels of red tide, there’s still the potential for respiratory issues and for fish kills. Pinellas County Health Department officials said if you have chronic respiratory issues already that you should stay away from the area. If you start to feel sick, they advise that you leave the area and go into air conditioning.

They also urge you to keep your pets away from the water.

According to FWC, over the past week, the red tide organism karenia brevis was observed in 65 samples. Bloom concentrations, defined as those greater than 100,000 cells per liter, were present in 34 samples: one in Manatee County, 26 in Sarasota County, five in and offshore of Lee County, and two in and offshore of Collier County.

Sarasota and Manatee are also among the counties where reports of respiratory irritation and fish kills suspected to be related to red tide were reported over the past week.

Red tide impacting the gulf and parts of Sarasota Bay

Red tide is showing up in the Gulf of Mexico and portions of Sarasota Bay.

In Sarasota, John Langan, the ocean technology program manager at Mote Marine Laboratory and Aquarium, said programmable hyperspectral seawater scanners that they have just off of a dock near the aquarium can sense red tide before the water changes color or there’s an odor.

According to Langan, the scanners are deployed for 40 days at a time and are solar-powered. They only detect the presence of red tide. He said they’re working to get them to detect the concentration levels too.

Langan said they also use underwater autonomous gliders to collect water quality data offshore. This, he said, allows them to look at areas that have high or low levels of dissolved oxygen or high or low levels of chlorophyll a. These parameters can help them predict where blooms may occur, he said.

Overall red tide forecasts predict variable transport of surface waters and southeastern movement of sub-surface waters in most areas into the weekend. 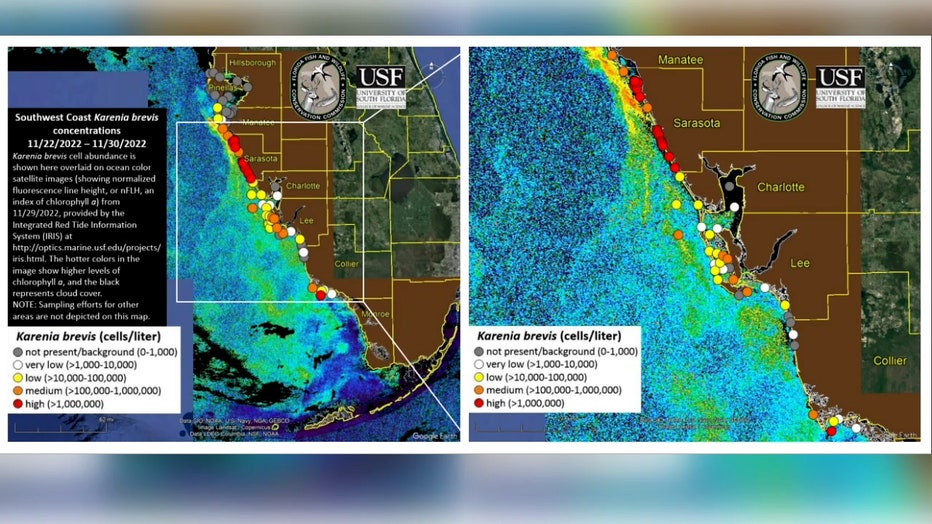 FWC said it takes samples every Monday. Pinellas County officials said they test every two to three days. Both said they plan to monitor the tides and winds as both shift.

"Low" concentrations, identified by a cell abundance of 10,000 - 100,000 cells per liter, can result in respiratory irritation; shellfish harvesting closures; possible fish kills, and probable detection of chlorophyll by satellites at the upper range. 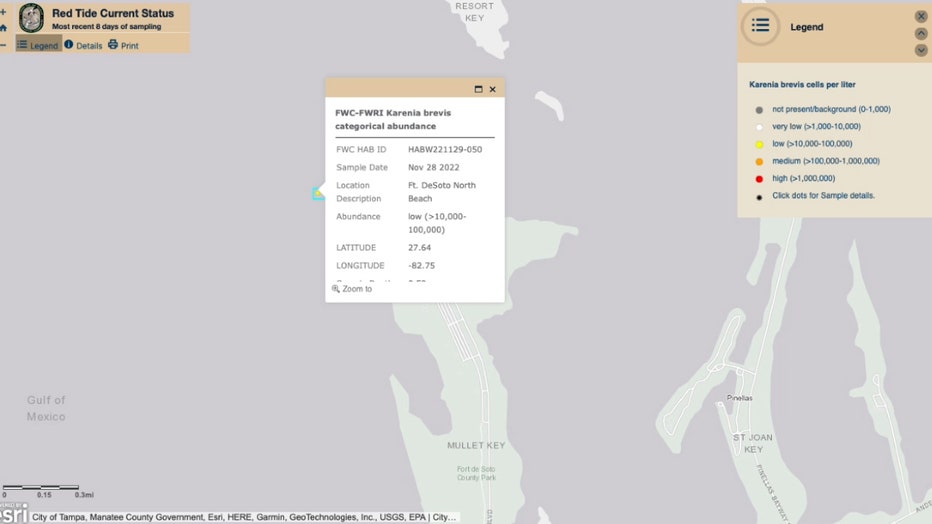 "Medium" concentrations, identified by a cell abundance of 100,000 - 1,000,000 cells per liter, can result in the same effects with an increased likelihood of fish kills and detection of surface chlorophyll by satellites.

"High" concentrations are identified by a cell abundance greater than 1,000,000 cells per liter, bringing intensified effects plus water discoloration.

For more information on red tide in your area, visit Mote's website.