SURFSIDE, Fla. - Families of the missing visited the scene of the Surfside condo building collapse Sunday as rescuers kept digging through the mound of rubble and clinging to hope that someone could yet be alive somewhere under the broken concrete and twisted metal.

Authorities said 150 people are still missing and 136 people have been accounted for. Rescue teams from the Tampa Bay area and around the world have joined the search efforts.

More than 70 local firefighters, paramedics, and doctors are in Surfside to help with the rescue and recovery of the Surfside collapse. Florida Task 3 is made up of fire personnel from Tampa, Hillsborough County, and St. Pete.

Rescue crews worked tirelessly through the weekend searching for any signs of life at the site of the deadly condo collapse in Surfside. No one has been pulled alive from the pile since Thursday, hours after the collapse.

"We have six to eight squads that are on the pile actively searching at any given time," said Daniella Levine Cava, Miami-Dade County mayor. "We need to be sure that the pile does not fall on them, that it does not fall on any possible survivors."

Family members of the victims were given the opportunity to visit Champlain Towers South on Sunday to pray and see the site up close.

"This was something that many of the family members had requested," the mayor said.  "I think that turned out very well and they were very grateful." 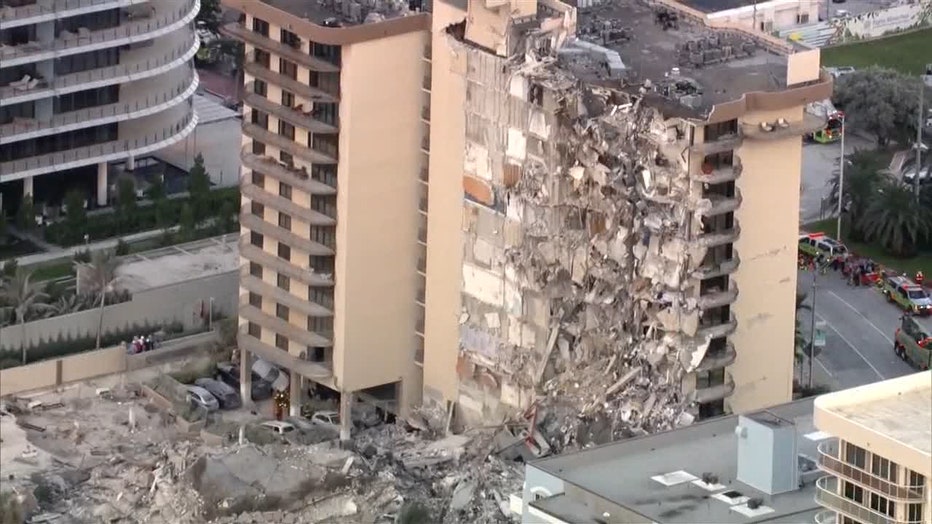 Some relatives have been frustrated with the pace of rescue efforts.

"My daughter is 26 years old, in perfect health. She could make it out of there," one mother told rescuers during a weekend meeting with family members. A video of the meeting was posted by Instagram user Abigail Pereira.

"It’s not enough," continued the mother, who was among relatives who pushed authorities to bring in experts from other countries to help. "Imagine if your children were in there."

Trauma surgeon helps with search and rescue at collapsed condo

First responders have been working overnight, digging through the rubble of the 12-story building that partially collapsed in Surfside, hoping to find survivors.

The Army Corp of Engineers announced they will conduct an extensive review on the condo’s nearby sister building, which was built by the same contractor. Federal officials have also stepped in to help, providing any assistance to those who need to relocate from the nearby structure.

Meanwhile, questions remain about the safety of other high rises in South Florida. The city of Sunny Isles Beach will begin reviewing a number of condo units starting Monday. The city of Miami is urging all buildings more than six stories tall and more than 40 years old to get an inspection.

PREVIOUS: Florida professor: Surfside condo showed signs of sinking in 90s, but that wouldn't be only cause for collapse

The investigation into what caused the collapse is expected to take several weeks.