CLEARWATER, Fla. - A memorial now stands as a way to honor 15-year-old Ethan Weiser’s life and remind drivers to watch for pedestrians along a busy road in Clearwater.

Pinellas County installed the memorial sign along Belleair Road near South Haven Drive Tuesday. It's the area where Weiser was hit and killed by a car on August 26 while walk to a school bus stop early in the morning.

"Honestly, it means that people are listening and there’s action that’s being taken," Matt Croasmun, Weiser’s uncle, said of the memorial sign installation.

Now, his family is on a mission to make sure no other family feels their pain.

"As much as we’d like to keep it focused on bus stops, the bigger picture, the bigger story here is how do we keep it safer for pedestrians of all ages," said Croasmun.

Every day since the crash, Croasmun said his family wants better safety, so no one else loses their life that way.

"An illuminated crosswalk, that way drivers can have awareness that somebody is in the road or that something is crossing the road, so that you can walk up, hit a button, flashing lights on either side of the road. No matter which direction you’re going you know something is going on up there," he said.

Family and friends of a Largo High School student who was hit and killed while walking with his little sister to the bus stop are asking for change on a road they say has been dangerous for a long time.

The city, county commission and school board are hearing that message from Croasmun, who has attended meetings to speak about pedestrian safety on Belleair Road since his nephew’s death.

"Everyone’s listening, so really what we’re pushing for on our side is it’s an easy ask, but we need to put action to our words," said Croasmun.

Ethan’s family is not alone either.

"I’ve gotten phone calls and texts and emails from parents that have had similar situations happen to them or parents that are concerned about their child’s bus stop," said Croasmun.

While they are becoming a voice for safety, Weiser’s grieving loved ones lean on each other for support. 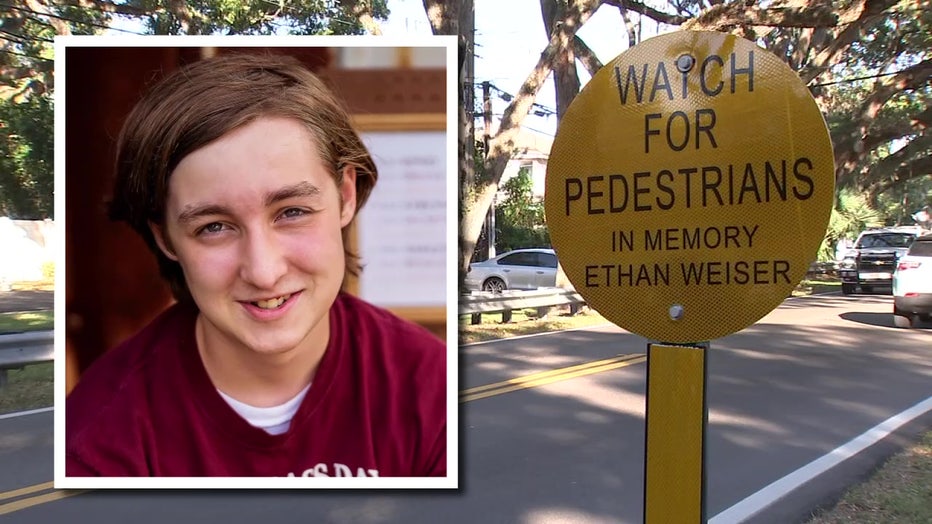 "So you have the random memories pop up and the random cry sessions," he said. "He would not be surprised that his family was strong and able to talk and help and make the best of a bad situation."

And it helps Weiser’s heart of service live on by calling for change.

"If we can make a difference in someone’s life, that was one of the things that Ethan was all about," said Croasmun.

Pinellas County government said workers completed a traffic corridor study of Belleair Road from U.S. 19 to Keene Road in 2019. A county spokesperson said there is a capital improvement project slated to begin its design phase in 2023.

Weiser’s family said they are waiting on Florida Highway Patrol’s final crash report to see what the short-term changes the county will be able to do.