RIVERVIEW, Fla. - It's become a habit for residents who live near Riverview Elementary to watch where they drive. For years, residents said they have been forced to put up with nails scattered in the crosswalks and walkways of the school.

"Every year during the school year, it's the same thing. More nails are dropped," said Jesse Durrance, a parent of kids at the school.

For every handful of nails they pick up, there are dozens more to greet them in the coming days.

"You have to hold them in two hands," said Durrance. "There's literally so many, they're carrying them in big zip lock bags."​​​​​​

The problem has gotten so bad, school employees walk the street and sidewalk with a magnet to be sure that their students and parents are safe.

"If some kid falls on their way to school, they could need a tetanus shot or worse. It's just not right," said Jessica Soto, a parent at the school who has also experienced issues with the nails.

Besides the growing safety concerns, the issue has become costly.

"My husbands been pulling nails out of my tires at least several times a month," said Soto. "I just had a blow out on I-75, and the force of it literally ruptured the back bumper."

The O'Reily Auto Repair Shop next to the school told FOX 13 it's now become a daily occurrence to patch holes and replace tires for residents on the street.

"I'm always dealing with flat tires," said Durrance. "My wife just had brand new tires put on her car last year, and we got a nail in the sidewall, and that's a $300 tire that I have to buy." 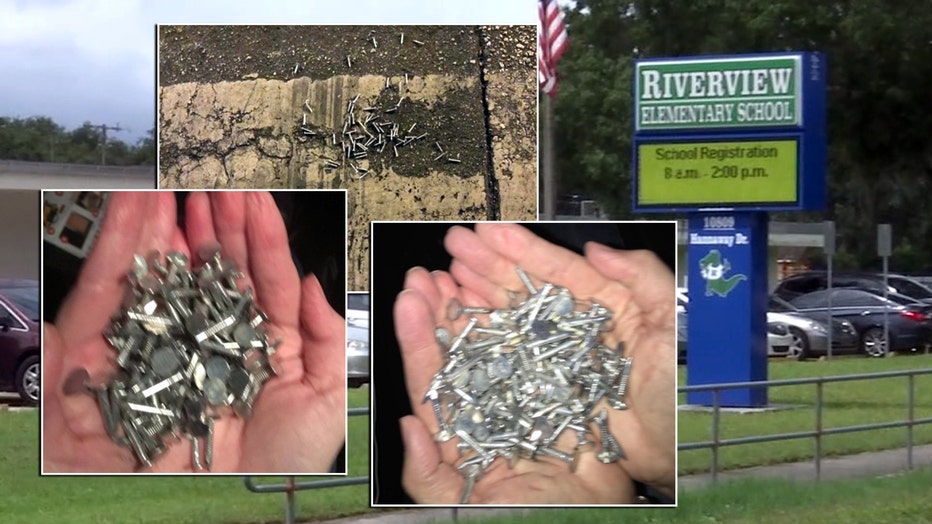 Those who live on Hannaway Drive believe a disgruntled neighbor is to blame, but until they have proof, there is not much residents can do.

However, in the meantime, they have a message for the person responsible.

"My 10-year-old girls did nothing to you and they do not deserve to be put in danger every time I pick them up from school," said Durrance.

HCSO said until they have proof, their hands are tied. Neighbors in the area are now working to set up cameras along the street.