In her own words: Widow urges vaccinations

Karen Weiskopf says her husband made a 'risky decision' not to get vaccinated for COVID-19 -- one he later regretted as the virus took its fatal toll. Here's what she told mourners at his funeral.

ST. PETERSBURG, Fla. - Officer Michael Weiskopf was the third Bay Area law enforcement officer to die due to COVID-19. On Tuesday, a service was held to honor his memory in St. Petersburg.

It’s a loss that has been heartbreaking for both the family and the community, but now, Weiskopf’s widow has a message for those mourning his death. Her message is to get vaccinated.

At the time of his death, Officer Weiskopf was unvaccinated. His wife says despite her best efforts, he didn’t want to get the vaccine. The 52-year-old lost his battle to COVID-19 on Friday, and his wife says she doesn’t want other families to have to experience what she’s going through.

"This was not Mike's time. He made a risky decision not to vaccinate like so many others," Weiskopf's widow, Karen, told those in attendance at the funeral. "I've watched a very strong mental and physical healthy man suffer through a very long and agonizing illness over the course of 28 days that ultimately resulted in his death. Mike had always had a keen sense that there was a coronavirus and never debated that fact. He remained steadfast in his beliefs that he did not know what was in the vaccine. Mike wished he had been vaccinated when the virus became too much to bear and we cried together and prayed."

Officer's widow urges everyone to get vaccinated at funeral

Before the funeral services were set to begin, the Florida Department of Health was outside The Coliseum, where services were held, to host a pop-up vaccine clinic in an effort to carry out the wishes of Officer Weiskopf's widow, who wanted to encourage others to get the shot.

Officer Weiskopf spent his life serving the public first as a chiropractor, then as a firefighter and EMT, before joint the St. Petersburg Police Department back in 2003. Chief Holloway says it’s a loss that could have possibly been avoided. 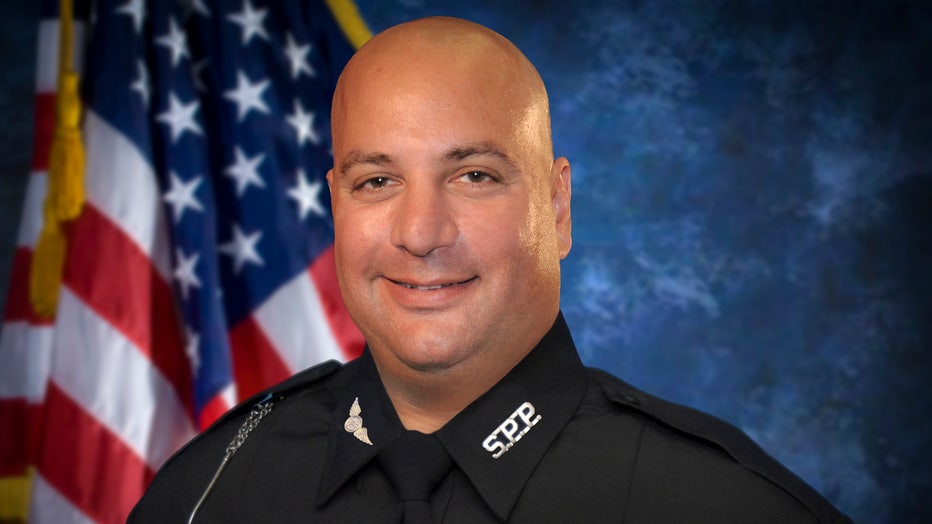 Friday afternoon, the department held a procession to transport Officer Weiskopf’s body from Bayfront Health over to the funeral home. The chief said Weiskopf worked on the traffic unit and took his job seriously, adding that it’s a tragic loss for the department.

The county health department was in the parking lot to provide vaccines to anyone who was interested. At the funeral, the rabbi told those in attendance that 10 people so far had gotten vaccinated at the pop-up vaccine clinic outside.

On Monday, Polk County Deputy Christopher Broadhead was laid to rest. He also passed away last week after spending several weeks in the hospital battling COVID-19.