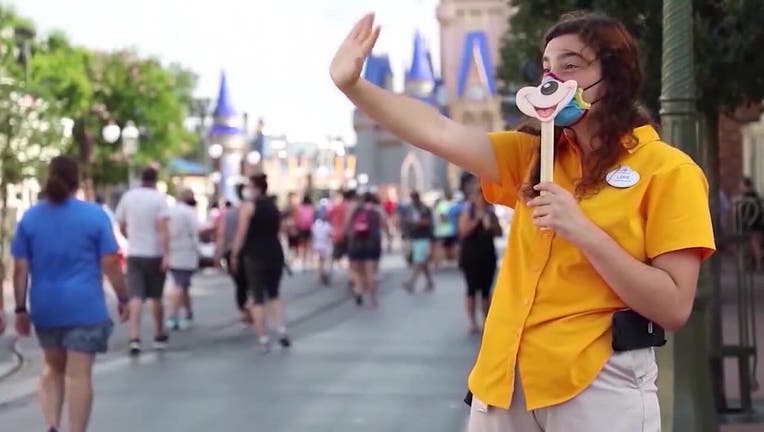 FORT LAUDERDALE, Fla. - Walt Disney World will now require union employees as well as non-union and salaried workers to be fully vaccinated against COVID-19 to keep their jobs at the theme park. The company also said Wednesday it would soon require vaccines for its cruise passengers ages 12 and up on ships to the Bahamas.

The deal was reached Monday with a union coalition, shortly after the Pfizer vaccine earned full Food and Drug Administration approval. It requires the workers to show proof of vaccination by Oct. 22 to remain employed, although employees can request exemptions for medical or religious reasons, a union statement said.

Any employee who doesn’t comply, and doesn’t request an exemption, will be "separated from the company with a ‘yes’ rehire status," according to the Service Trades Council Union. Before layoffs and furloughs due to the pandemic, the coalition covered about 43,000 of 77,000 Disney World workers.

Disney announced last month that all non-union hourly and salaried employees would be required to receive the vaccine within 60 days. The company also asked all employees who were working from home to show proof of vaccination before returning to work.

The company will hold on-site vaccine events for employees over the next several weeks, the union statement said.

On the cruise side, Disney will require all passengers ages 12 and older to be fully vaccinated on trips to the Bahamas. The decision comes days after that country announced it would not allow ships to enter its ports, including private islands owned by various cruise lines unless eligible passengers are fully vaccinated. The order runs from Sept. 3 through Nov. 1.

Cruises to resume from Tampa in October

Port Tampa Bay is preparing for cruises to set sail this October, just as a judge said cruise lines are allowed to require proof passengers have been vaccinated.

Earlier this month, 26 crew members and one passenger tested positive for COVID-19 on a Carnival cruise just before the ship made a stop in Belize City.

According to a statement from Disney, unvaccinated children must provide proof of a negative COVID-19 PCR test taken between 5 days and 24 hours prior to the cruise and will also be given a second test at the terminal before boarding.

"We are resuming sailing in a gradual, phased approach that emphasizes multiple layers of health and safety measures," the statement said.

Other cruise lines including Royal Caribbean have updated their policies with similar mandates. Carnival said that only children under 12 and adults with a medical condition that prohibits vaccination are exempt from the requirements starting Aug. 28 through October, for departures from all Atlantic and Gulf homeports.

The mandates conflict with orders of Florida's Republican Gov. Ron DeSantis, who forbid cruise lines from requiring vaccines for passengers. The issue is being decided in the courts where the latest ruling by a federal appeals court overturned pandemic restrictions on Florida-based cruise ships.

The U.S. Centers for Disease Control and Prevention is fighting the DeSantis-led lawsuit challenging the regulations, arguing the rules would prevent future COVID-19 outbreaks on ships that are vulnerable to the spread of the virus because of their close quarters and frequent stops at foreign ports.