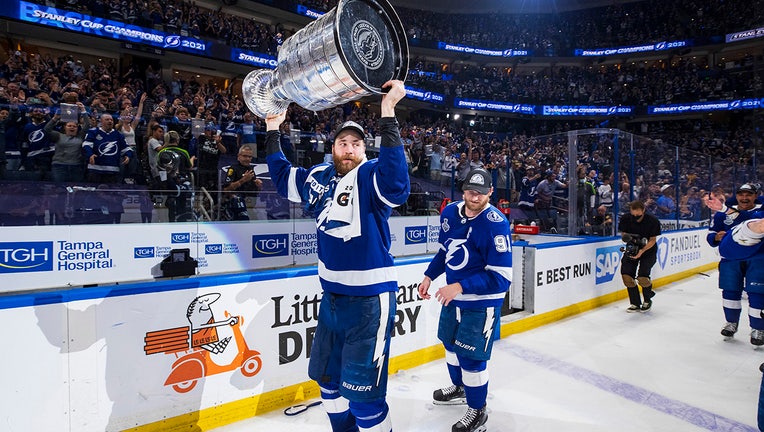 TAMPA, Fla. - It’s going on 40 years since the NHL last celebrated a three-peat Stanley Cup champion as part of the New York Islanders’ run of four straight titles from 1980-83.

The Lightning have won two straight, and defenseman Victor Hedman doesn’t see why Tampa Bay can’t make it three in a row despite another offseason of salary cap-forced subtractions.

"We’re not satisfied," Hedman said. "We don’t want to see anybody else raising that Cup, that’s for sure."

With several Eastern Conference teams such as the Islanders, Carolina and Florida — all three lost to Tampa Bay in the playoffs last season — poised to close the gap, the reality is this season’s Cup still runs through "Champa Bay."

Though the Lightning were forced to unload their entire third line, while plugging holes with modestly priced veterans, captain Steven Stamkos believes the team’s window of opportunity hasn’t shut yet, especially if the salary cap begins nudging upward after staying flat the past two years.

"You just hope that the way things are trending, the salary cap is going creep up," Stamkos said. "But at this point, right now, we’re not thinking about that. You’re thinking about what do we have to do to win it again."

FanDuel Sportsbook favors the Lightning to win the East, but the Islanders might top the list of teams wanting to have a word with the oddsmakers after having each of their last two seasons end by losing to Tampa Bay in the semifinals, including a 1-0 loss in Game 7 in June.

"I think internally we’ve seen a lot of growth and (there are) still spots we think we can be better," said Islanders captain Anders Lee, who returns after being sidelined most of last season with a knee injury. "I still think there’s something there that we know we have, and we just got to put it on the table."

Then there’s the Hurricanes, whose Sebastian Aho-led core of young stars remain in place despite the team re-shuffling other parts of its roster this summer. If only they can get their goaltending set with the offseason additions of Antti Raanta and Frederik Andersen, best known for playing a role in Toronto’s playoff collapses during his five seasons with the Maple Leafs.

Never count out Pittsburgh, though Sidney Crosby and Evgeni Malkin will miss the start of the season recovering from injuries. And don’t forget Alex Ovechkin and the Washington Capitals, so long as their aging roster remains healthy after injuries led to their third consecutive first-round exit in May.

"I’m using it as an excuse but I don’t want to use it as an excuse: We need to be healthy going into the playoffs and that’s part of it," Capitals GM Brian MacLellan said. "I think we can compete with all the best teams in the league."

The Tampa Bay Lightning’s Game 5 win over the Montreal Canadiens was extra sweet for fans after they were forced to cheer on their team from home during the COVID-19 pandemic. Here’s the view from inside and outside Amalie Arena.

Gerard Gallant lands his fourth head-coaching job in taking over the New York Rangers, and the East will feature three relative first-timers behind the bench.

Montreal’s Dominique Ducharme and Buffalo’s Don Granato were promoted to full-time jobs after spending last season as their teams’ interim coaches. In Columbus, Brad Larsen takes over the Blue Jackets after spending the past seven seasons as an assistant under John Tortorella and Todd Richards.

The Canadiens had a tumultuous offseason after their surprise Stanley Cup run ended in five games to the Lightning. Captain Shea Weber’s career is uncertain because of injuries. Montreal lost top defensive forward Phillip Danault and Corey Perry in free agency, and had Carolina poach forward Jesperi Kotkaniemi by signing him to an offer sheet.

Then there’s the uncertain status of goalie Carey Price, who had offseason knee surgery.

Auston Matthews and the Maple Leafs won’t have the pandemic-created North Division to pad their regular-season record as happened last year. Not that it helped in the playoffs, when the Maple Leafs squandered a 3-1 first-round series lead to Montreal. Toronto hasn’t won a playoff round since 2004.

"I think it’s funny when it’s like a now or never," said Matthews of management and fans losing patience in the Leafs’ core. "But yeah, we’d obviously like to take some steps forward and get over that hump."

The Flyers opened training camp debuting T-shirts with, "Something To Prove" written on them. A year after finishing second in the Metropolitan Division, the Flyers missed the playoffs last season following a second-half meltdown.

"Two years ago, we felt like we took a big step forward, and last year we took a few steps back," captain Claude Giroux said. "That is not the team we believe we are. We are going to learn from that last year."

BRINGING UP THE REAR

After trading Reinhart and Ristolainen, losing starting goalie Linus Ullmark to free agency and with Jack Eichel stripped of his captaincy and future in Buffalo in limbo over a dispute on how to treat a neck injury, the Sabres are already in jeopardy of missing the playoffs for what would be an NHL record 11th consecutive season.