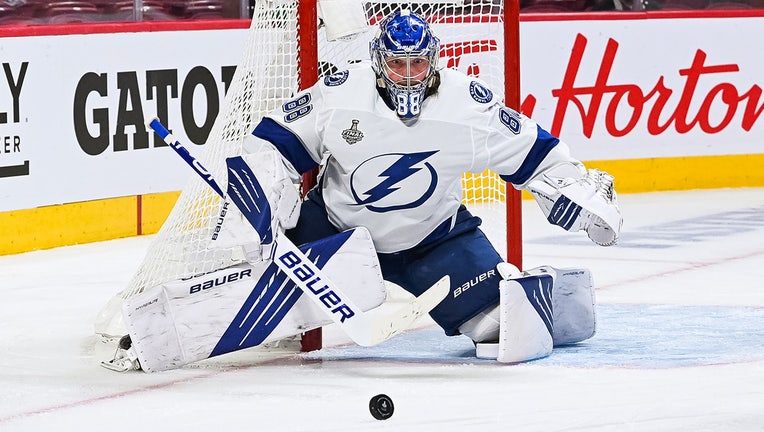 TAMPA, Fla. - No team has been more resilient in the NHL playoffs than Andrei Vasilevskiy and the Tampa Bay Lightning, who have a knack for rebounding from losses and closing out opponents standing between them and a Stanley Cup title.

The defending champions are 14-0 in games following a postseason loss over the past two years, a playoff streak that includes six bounce-back wins this summer as the Lightning bid for a second consecutive championship.

Vasilevskiy not only has been the winning goaltender in all those victories but has run off a string of four consecutive series-clinching shutouts dating to the 2020 Stanley Cup Final against the Dallas Stars.

Three of those stellar performances followed losses in potential elimination games, a situation the Lightning find themselves in again after Monday night’s 3-2 overtime road loss to the Montreal Canadiens.

The defeat trimmed Montreal’s series deficit to 3-1 in this year’s final. Game 5 is Wednesday night in Tampa.

With Vasilevskiy’s track record in not losing consecutive playoff games since Tampa Bay was swept in the first round by the Columbus Blue Jackets in 2019, the Lightning understandably are confident of their chances to finish their mission.

"In the past, we’ve done a good job of leaving the previous game in the past if we’re coming off of a loss," center Barclay Goodrow said. "We have a great leadership group that gets our minds in the right spot."

A Bay Area musician is making it big with a song he wrote to spur on the Lightning during their run for the Stanley Cup.

The Lightning bounced back from an overtime loss to the Stars in Game 5 of last year’s Final to clinch the series with a 2-0 victory in Game 6. That clincher came on the heels of eliminating the New York Islanders in six games after losing Game 5 in OT the previous round.

"It’s why you go up in series, to give yourself a chance or multiple chances to knock a team out. We just have to regroup and see if we can do it (Wednesday night)," Lightning coach Jon Cooper said.

The Lightning also needed two cracks in the first round to eliminate the Florida Panthers in six games last month. They then ousted the Islanders in the Cup semifinals with a 1-0 shutout after losing Game 6 on the road in overtime.

Cooper cautioned, though, that previous success and returning home to Amalie Arena doesn’t guarantee anything this time.

"You can’t just take experience and throw it on the ice and sit here and say you’re going to win. You have to work for it," Cooper said.

"We played some extremely solid games in these situations, but the bottom line is it’s your work ethic that gets you there," Cooper added. "To win the Stanley Cup, you have to earn it. The other team’s not going to give it to you."

And, the Canadiens certainly aren’t conceding after winning Game 4 on Josh Anderson’s goal just under four minutes into overtime.

"After tonight, I think we’re in a good position," Anderson said.