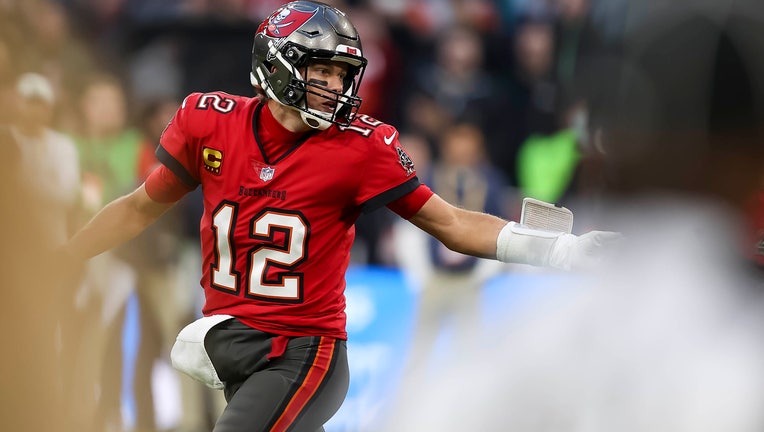 Brady connected with Julio Jones and Chris Godwin on scoring passes and Leonard Fournette ran one in as the Bucs (5-5) improved to .500 and snapped Seattle's four-game winning streak.

German fans packed Allianz Arena for the historic game and the Bucs delivered with a balanced offensive performance on three long scoring drives. Rachaad White started and ran for 105 yards on 22 carries.

Brady completed 22 of 29 passes for 258 yards to add Germany to his list of international wins after victories in London (twice) and Mexico City with the New England Patriots.

Trailing 21-3, Seattle's Geno Smith threw touchdown passes to Tyler Lockett and Marquise Goodwin to make the score 21-16 with 3:58 to play.

Smith found Goodwin in the corner of the end zone for a 19-yard score on fourth-and-1 to complete a drive that started on the Bucs 45 after Brady threw his first interception since the season opener. Linebacker Cody Barton picked it off.

Lockett caught a 21-yard touchdown pass from Smith with 8:20 left, but the 2-point conversion try failed, leaving the score 21-9.

Brady is the first quarterback to start a regular-season game in three countries outside the U.S.

The seven-time Super Bowl champion found Jones on a short crossing route and the receiver ran it in for a 31-yard scoring play early in the second quarter. Jones put his left shoulder down and got past safety Josh Jones at the goal line.

After weeks of speculation, Tom Brady and Gisele Bündchen announced they will be going their separate ways.

Fournette then rumbled in from 1 yard to finish a 13-play, 86-yard drive. He scored two plays after a wide-open Scotty Miller caught a 22-yard pass and went down while bobbling the ball at the 5.

Godwin caught a 4-yard touchdown reception to make it 21-3 early in the fourth quarter. Godwin led the Bucs with 71 yards on six receptions.

Down 14-3, Seattle drove to the Bucs 9 before Devin White's strip-sack of Smith, whose fumble was recovered by Anthony Nelson at the 13.

READ: Is Tom Brady's touch wearing off for the Bucs?

Seattle had 57 net yards in the first half and came out throwing after halftime with Smith completing four straight passes. But the drive stalled on the Tampa 22 on a third-down incompletion intended for DK Metcalf, who was then flagged for unsportsmanlike conduct. Jason Myers kicked a 55-yard field goal to get Seattle on the board at 14-3.

The Bucs drove to the Seattle 22 when Fournette took a direct snap, rolled right and threw across the field to Brady — but it was intercepted by cornerback Tariq Woolen, who had the slow-footed, 45-year-old quarterback well covered at the 6.

Brady was then flagged for tripping — which would be a yellow card if he played for Bayern Munich.

Down 14-3, Seattle drove to the Bucs 9 before Devin White’s strip-sack of Smith, whose fumble was recovered by Anthony Nelson at the 13.

Just inside the two-minute warning of the first half, White burst through the line unblocked and brought down Smith for a 10-yard loss at the Seattle 10.

On Seattle’s first drive, Joe Tryon-Shoyinka beat rookie tackle Abraham Lucas around the edge and dropped Smith for a 17-yard loss on third down.

Fournette left in the fourth quarter with a hip injury. Bucs CB Zyon McCollum was ruled out at halftime with a concussion.

Seahawks practice squad linebacker Aaron Donkor of Germany led the team out of the tunnel carrying the "12" flag. Donkor is not on the 53-man roster.

Seahawks: Bye before hosting the Las Vegas Raiders on the Sunday after Thanksgiving.

Buccaneers: Bye and then at Cleveland on Nov. 27.