Despite many accomplishments, outgoing mayor reveals what haunts him

ST. PETERSBURG, Fla. - After eight years of overseeing major changes to the city of St. Petersburg, Mayor Rick Kriseman is a single day away from handing the keys to city hall to his successor, Ken Welch.

No change was bigger than what sits perpendicular to Beach Drive, just off the edge of downtown. The St. Pete Pier gleamed on a sunny Tuesday afternoon, filled with children and families on the property Kriseman saw to completion, even though the design wasn't his first choice.

"It is far better than I ever dreamed it would be," he said during an interview Tuesday. "This was about trying to create spaces and places where everyone in the community, and visitors alike, and our families, could enjoy it."

Eight years of highs and lows 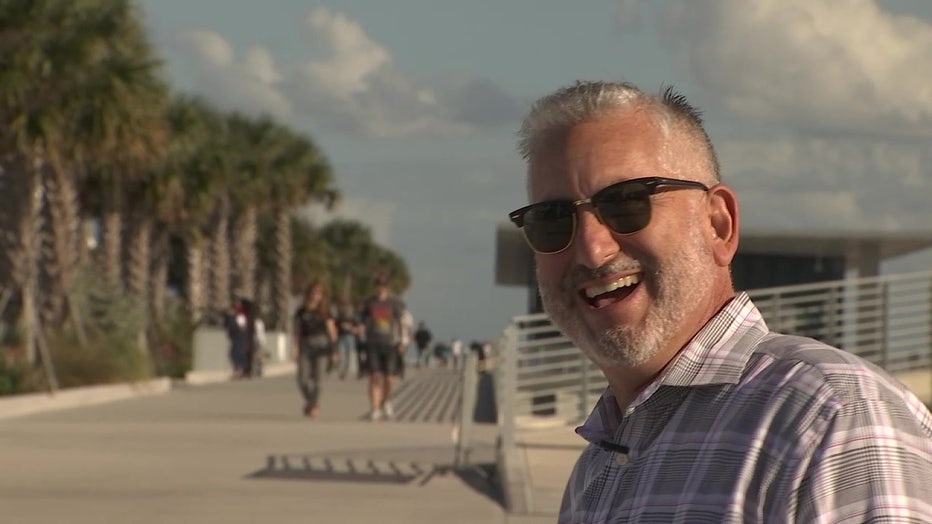 Outgoing St. Petersburg Mayor Rick Kriseman stands along the pier in the final days of his 8-year term.

As Kriseman walked the colonnade lined with grass, refreshment stands, and splash pads, he said it was hard to remember what it was like even just a few years before when the decaying, abandoned inverted pyramid still stood.

The new pier – which opened in July of 2020 and cost $90 million – solidified his time in office as one of consequence, but also symbolized a city deep into its resurgence.

The sculpture is clear, sturdy, and light, yet, it’s also none of those things. The featured artwork at the St. Pete Pier is open to interpretation, at the insistence of the creator.

RELATED: Artist behind St. Pete pier's 'Bending Arc' invites you to 'lie down in the grass and look up'

Streets that were deserted when he took office in 2014 are now flanked by apartment buildings and public art, and are filled with festivals or parades many weekends per year.

Granted, the national economy was generally solid for his eight years, but he argues there's more to the city's growth than that.

MORE: From the Railroad Era to the inverted pyramid, St. Pete's piers took on many forms since the 1800s

But no term is without regrets. He acknowledges the city didn't appreciate how much pressure would be placed on the remaining sewage plants when Albert Whitted closed in 2015 and then 200 million gallons of wastewater spilled.

But it is the spillage of blood on city streets that most haunts him. St. Pete averaged 18 homicides for the first seven years of his term, but hit 31 last year.

Protesters in St. Petersburg to face fines to blocking or standing in the street.

Pleas for an end to the ‘no snitch’ culture, anti-violence marches, and a police chief to whom Kriseman gives high praise, have still not done the trick. The outgoing mayor says larger reforms are needed to truly address the violence.

"Our state has made it impossible for anyone in my position to do anything as it relates to guns," said Kriseman.

Another mayor, still no deal with the Rays

The city's biggest development questions linger over the Tropicana Field property and the team whose stadium currently sits on it.

"We were ready to start putting numbers on the table [for a new stadium] and seeing if we could reach an agreement," Kriseman said. "But [the Tampa Bay Rays] are clearly exploring something across the bay."

Indeed, public officials in Tampa and Hillsborough County say the Rays are interested in developing in Ybor City and switching to a split season plan with Montreal.

This week, Tampa Mayor Jane Castor met with the team Rays' owner as the team scouts both sides of the bay and beyond for a potential new home base. Their focus is still on a split-city plan, but where does the mayor of Tampa stand?

Kriseman points out the team already explored an Ybor option between 2016 and 2019 and wonders why the team is not exploring full-season stadiums in St. Pete.

"I ask myself and I ask them, what has changed between 2019 and 2021, in a negative way, that says this area can't support a full season, when two years ago it could?" Kriseman questioned.

He also points to numerous residential and corporate projects happening on both sides of the bay, a new Howard Frankland Bridge being built, and the potential for regional rail systems – all of which would benefit the Rays.

"Things are happening that I think should lead the team to believe they will be more successful than they were before," he said.

The wait is over for who will reimagine Tropicana Field after St. Pete Mayor Rick Kriseman announced a developer for the project Wednesday.

Kriseman hopes the next mayor, Ken Welch, will follow his blueprint of asking the Rays to fund most of the stadium, but offer city cooperation for new streets, parking, hotels, restaurants and housing.

"The question is, are they prepared to sit with him and have a serious discussion about what the future looks like? If they are, I think a deal can be done. But he is the fourth mayor now," Kriseman said.

Without revealing specifics over the holdups, he says compromise is the only way to keep professional baseball in Tampa Bay.

"If a deal isn't happening, you have to look at both sides and say, 'Alright, you have gone through 13 years and four mayors, maybe it isn't just this side. Maybe there is something going on on the other side that is interfering with the ability to get something done,'" Kriseman said.

The 2027 expiration of the Trop lease is now five years away.

"We have all the pieces in place for something that would make sense. But a deal only happens if both sides come to the table."

Even without a new stadium for the Rays, city council could approve the Midtown project, another feather he would like to stick in his cap at the end of the day. That combined with the redone pier would make the Kriseman stamp on St. Pete's future unmistakable.

And soon, he will be one of them, watching to see what the new mayor does.

Kriseman did not rule out running for public office again in the future, but says it will not be in 2022.

He is also unsure what he will do next.