SURFSIDE, Fla. -  The search for victims of a Florida condo collapse continued Monday with the death toll climbing to 94 people as crews pressed on in their commitment to finding every single victim.

Officials on Monday announced the recovery of four additional victims overnight, bringing the death toll in the June 24 collapse of the 12-story Champlain Towers South to 94. Miami-Dade County Mayor Daniella Levine Cava said 83 of the victims have been identified but "the process of making identifications has been made more difficult as time goes on."

At least 22 remain unaccounted for at the site in Surfside, located just north of Miami Beach.

"To give you an answer when we feel we’ll recover everyone, I can’t give you an exact date," the fire chief said. "We’re doing everything that we can — everything possible — until we feel that we’ve delayered every floor." 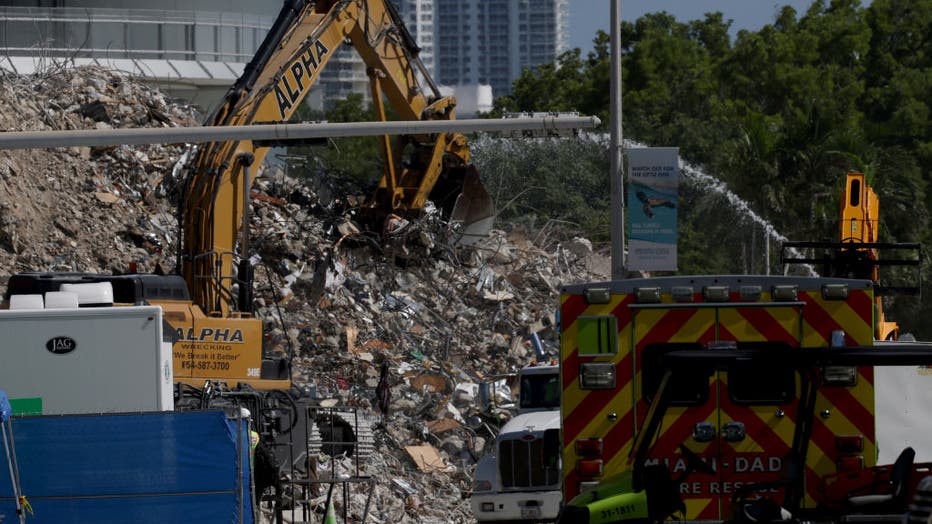 SURFSIDE, FLORIDA - JULY 11: Construction equipment is used to dig through the mound of debris from the collapsed 12-story Champlain Towers South condo building is seen through fencing on July 11, 2021, in Surfside, Florida. (Photo by Anna Moneymaker

The effort switched from a rescue to a recovery phase last week. Crews have been digging through the remaining pile of rubble, peeling layer after layer of debris in search of bodies. The unrelenting search has resulted in the recovery of over 14 million pounds of concrete and debris, Levine Cava said.

They have been combing through the site 24 hours a day since the collapse. Rescue workers are searching not only in hopes of recovering human remains but also possessions of the victims. Surfside Mayor Charles Burkett said the work is so delicate that crews have found unbroken wine bottles amid the rubble.

"It doesn’t get any less difficult and finding victims, that experience doesn’t change for our search and rescue folks," he said. "It takes a toll, but you’ve got to love the heart that they’re putting into this and we’re very grateful."

The team had joined other task forces from around the United States to assist first responders from Miami and Miami-Dade County, working 12-hour shifts. They searched through South Florida's intense summer heat, and in the pouring rain, pausing only when lightning was spotted nearby. They also paused operations as officials made plans to implode the still-standing portion of the condo tower on July 4.

Confirmed deaths rose to 90 Sunday as search efforts continue in Surfside, Florida. This comes one week after a demolition to the remaining structure.

The Israeli team used blueprints of the building to create detailed 3D images of the disaster site to aid in the search. They also gathered information from families of the missing, many of who were Jewish, to build a room-by-room model laying out where people would have been sleeping during the pre-dawn collapse.

A memorial walk was held Saturday to celebrate the crews who have come across across the country and around the world to help in the effort. Levina Cava described the event as "a beautiful moment." She gave the keys to the county to the Israeli commander and colonel — her first two keys handed out as mayor.

Four teams from Florida, Indiana and Pennsylvania are still dedicated to the recovery effort, Cominsky said. Teams from Virginia, New Jersey and Ohio are preparing to leave.

The cause of the collapse of the Champlain, which was built in 1981, remains under investigation. Debris removed from the site was being sorted and stored in a warehouse as potential evidence, officials said.

A 2018 engineering report found that the building's ground-floor pool deck was resting on a concrete slab that had "major structural damage" and needed extensive repairs. The report also found "abundant cracking" of concrete columns, beams and walls in the parking garage.

Just two months before the building came down, the president of its board wrote a letter to residents saying that structural problems identified in the 2018 inspection had "gotten significantly worse" and that major repairs would cost at least $15.5 million. With bids for the work still pending, the building suddenly collapsed.

Authorities are launching a grand jury investigation into the collapse and at least six lawsuits have been filed by Champlain Towers families.

Meanwhile, COVID-19 tests were set to be administered at the Surfside command center on Monday after a vaccinated Miami-Dade county commissioner who helped local officials at the site said he and his chief of staff tested positive for the virus.

A news release late Sunday from Miami-Dade County Commission Chairman Jose "Pepe" Diaz said he and his chief of staff Isidoro Lopez, who also received a vaccine against COVID-19, came down with flu-like symptoms earlier in the day and later tested positive for the virus.

"Staff and others who have been in close contact with them will be getting tested between today and tomorrow," the statement said. The statement also said Diaz and Lopez would be isolating and following guidelines from the Centers for Disease Control and Prevention.