TAMPA, Fla. - Within two weeks, a one-of-a-kind Super Bowl will take place right in Tampa where the Buccaneers will be the first NFL team to play the big game on their home turf.

It will be a rematch of Week 12 when the Bucs take on the Kansas City Chiefs, but, meanwhile, the preparations for Feb. 7 were already underway before the home team won the NFC Championship on Sunday night.

Over the last few weeks, Raymond James Stadium has been transformed with fences and tents rising around the stadium. However, the city has really been preparing for the Super Bowl for nearly a year.

Tampa was rewarded the bid to host Super Bowl LV in 2017 after Los Angeles's stadium was behind on construction.

The Super Bowl LV host committee said it got right to work but was thrown a huge curveball in March 2020 when the COVID-19 pandemic began. Still, every year, the Super Bowl attracts plenty of fans who don’t have a ticket but just want to be in town for the game.

Some of the traditional events will go virtual, others have been canceled. 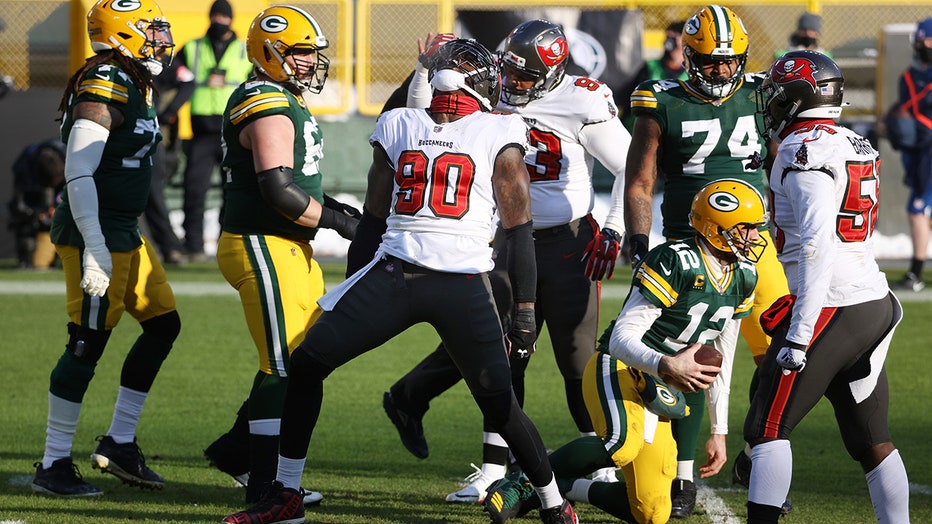 GREEN BAY, WISCONSIN - JANUARY 24: Jason Pierre-Paul #90 of the Tampa Bay Buccaneers celebrates after sacking Aaron Rodgers #12 of the Green Bay Packers in the first quarter during the NFC Championship game at Lambeau Field on January 24, 2021 in Gre

For instance, Super Bowl media day is usually a time when media outlets from all over the globe typically pack together to ask some of the weirdest questions. One journalist even popped the question to Tom Brady one year. This time around, it will take place Monday, but like other press conferences since the pandemic, it will be virtual.

Many of the traditional big parties won’t be happening either. According to ESPN, because of COVID protocols, the teams won’t be allowed to arrive in Tampa until two days before the game – another advantage to being the host city because this won’t impact the Bucs.

Capacity restrictions are also a major factor – 22,000 fans will be allowed, including 7,500 health care workers.

"I don’t think any of us could’ve predicted the twists and turns that would take place as part of the planning process," said Rob Higgins, the President and CEO of the Tampa Bay Super Bowl LV host committee. "On-site meetings, site visits, and familiarization trips that would usually be in person but we quickly switched to virtual and we’re just so proud of how all of our partnerships never missed a beat."

READ: Where you can buy Bucs NFC Championship gear

Leading up to the big game is "The Super Bowl Experience," offering football fans attractions spanning three miles along Tampa's Riverwalk -- from Armature Works to Sparkman Wharf, including both sides of the river. For the first time, this event will be completely free.

This father-son duo from Lakeland were very excited when the Bucs won the NFC championship, making history as the first NFL team to play the Super Bowl at home!

For crowd control, those who are interested in attending must download the NFL OnePass mobile app to reserve a time. There will be plenty of football activities and exhibitions.

PREVIOUS: Interactive 'Super Bowl Experience' comes to Tampa ahead of the big game

"The Super Bowl Experience" begins Friday, Jan. 29, and continues through the weekend. It will close Monday and Tuesday but will reopen Wednesday, Feb. 3. It will come to an end on Saturday, Feb. 6.

Face coverings will be required in and around the city parks.

"There’s going to be a lot of health and safety protocols in place with Super Bowl Experience presented by Lowe’s, you’ll have a health screening that you’ll do on the app before you enter, masks will be mandatory, there will be social distancing, we’ll have fan managers roaming the parks to make sure everybody is doing their part to stay safe," Higgins said. 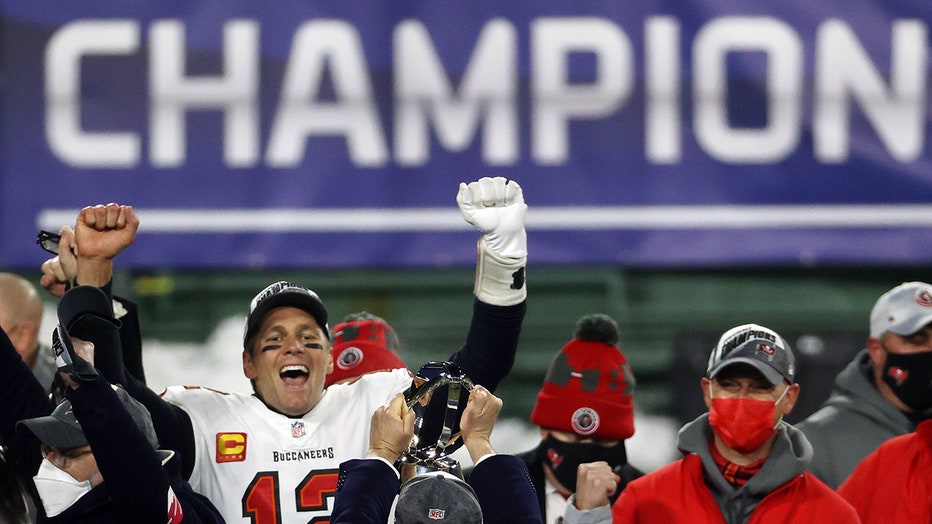 GREEN BAY, WISCONSIN - JANUARY 24: Tom Brady #12 of the Tampa Bay Buccaneers celebrates with teammates after their 31 to 26 win over the Green Bay Packers during the NFC Championship game at Lambeau Field on January 24, 2021 in Green Bay, Wisconsin.

Tampa is going to be on the world's stage on the days leading up to the Super Bowl and on game day itself.

"On that Super Bowl Sunday, Feb. 7th, for several hours, three, four hours, it is a commercial for Tampa. that is a commercial that will be seen all over the world," said Santiago Corrada, the President and CEO of Visit Tampa Bay.

Even though the game itself has limited capacity, Corrada says the Super Bowl will have a huge economic impact on the Tampa Bay region.

"We’ve had people move here because they’ve seen a Super Bowl on television," Corrada said. "We’ve had corporations look at relocating to this region because they saw the Super Bowl or they experienced it live and in-person, and of course conventions and groups and meetings that have said, oh my gosh that’s a fabulous location."