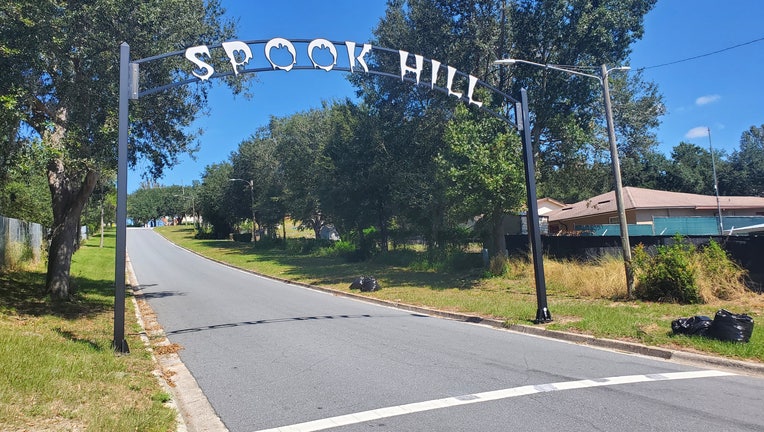 LAKE WALES, Fla. - A concoction of legends, science, and a dash of Florida weirdness all offer explanations for why tourists and residents continue to be thrilled by a hill in Lake Wales.

Before Central Florida became home to the ‘House of Mouse,’ quirky roadside attractions were king.

As highways were built across America in the late 1920s and 30s, roadside attractions began popping up off the beaten path with hopes of taking drivers off the interstate and into small towns across the country.

In Florida, visitors could see mermaids, alligators and even take a sip from the Fountain of Youth. Many of Florida’s original roadside attractions are just a memory, but some still exist, including one that has been scaring tourists long before the haunted mansion opened at Disney World – Spook Hill.

Where is Spook Hill? 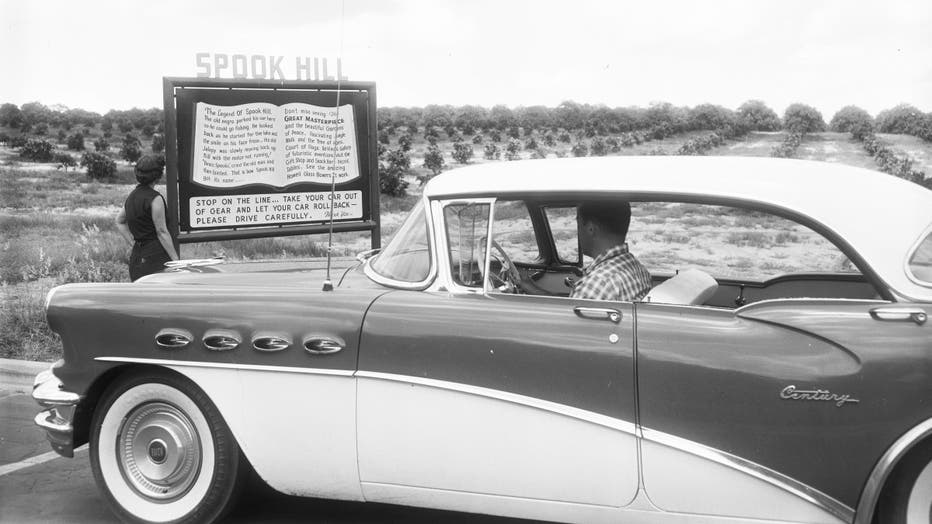 A couple reads a sign displaying the legend of Spook Hill - Lake Wales, Florida in 1956. Courtesy of the Florida Memory Project.

It not for the arch over the 2-lane roadway located in the southeast corner of Polk County, you might miss it.

Spook Hill is actually the dip in the road on Fifth Street, between Burns Avenue and Spook Hill Elementary School.

The so-called gravity hill creates an illusion where cars stopped at the bottom of the hill appear to roll backward, uphill, and it has been giving people ‘the spooks’ for decades. 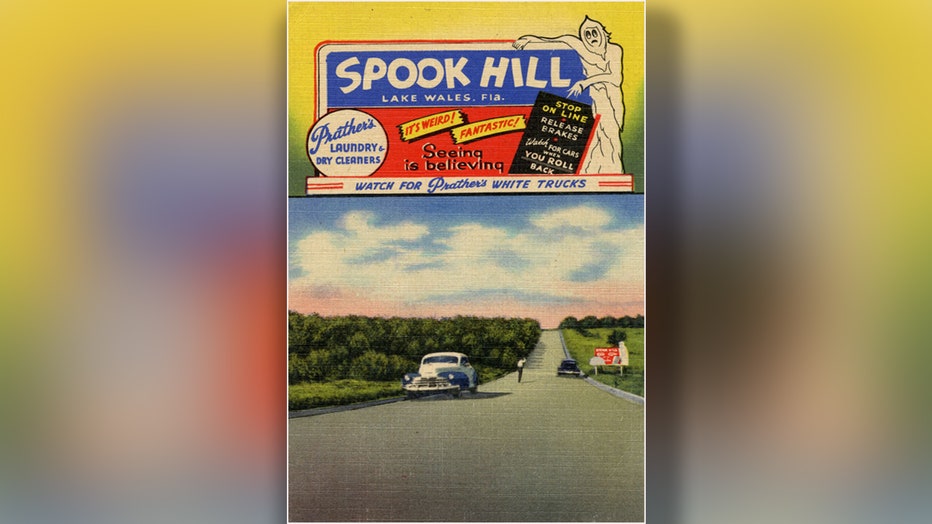 A photo from 1950 advertising Spook Hill. One could drive their car to the bottom of the "hill", turn off the engine, release the brakes and watch as the car rolled back as much as 100 feet up the hill. This is due to an optical illusion. Courtesy of

"It is in fact an optical illusion sort of thing," explained Anderson Hanna, curator of collections and exhibits for the Lake Wales History Museum. "The way that it looks is not the way that it really is."

READ: For more than a century, Sunken Gardens has been a tropical oasis in the middle of downtown St. Pete

Spook Hill gained popularity in the 1950s, during the Golden Age of America’s roadside attractions.

"A lot of local businesses and things like that were like, you know, if we had a roadside attraction, people could get off of those main highways and come into our little town and possibly get some sort of commerce and things of that nature…that’s one of the reasons roadside attractions actually came about," Hanna stated.

An archway marking Spook Hill runs over the road, which is still a thoroughfare, and next to it is a sign with a ghost explaining one legend of why the cars appear to roll uphill.

The legends of Spook Hill

A sign with a ghost on the right-side of Spook Hill explains one legend of why cars appear to roll uphill.

The friendly looking ghost aside the sign at Spook Hill explains the first legend of the oddity. It reads:

"Ages ago an Indian town on Lake Wailes lake was plagued with raids by a huge gator. The town’s great warrior chief and the gator were killed in a final battle that created the huge swampy depression nearby. The chief was buried on its north side. Later pioneer haulers coming from the old Army trail atop the ridge above found their horses laboring here…at the foot of the ridge…and called it Spook hill. Is the gator seeking revenge or the chief protecting his land???"

Another popular tale surrounding the mystery of Spook Hill was created decades ago by an old Lake Wales restaurant called Barney’s Tavern.

The restaurant published a pamphlet describing the "real" story behind Spook Hill.

Optical illusions: Three ways your eyes may deceive you

Sometimes the brain receives information from the eyes that doesn't seem to 'fit.’ That's an optical illusion, but did you know there are three different types? See if you can tell what's really going on in each of these images.

The pamphlet says that, after years of pillaging and plundering on the high seas, two pirates, Teniente Vanilla and Captain Gimme Sarsaparilla, (who supposedly made Tampa’s Jose Gaspar look like an ordinary freebooter), decided to retire to Lake Wales.

When Vanilla died, he was buried at the foot of Spook Hill and Captain Sarsaparilla ended up at the bottom of the pond, bearing the name Lake Wales.

Barney’s Tavern leaflet from 1954. Leaflet describing Spook Hill, a tourist attraction in Lake Wales in Polk County, Florida, including legendary origins of the phenomenon and comments from previous visitors. The leaflet was sponsored by Barney's, a Lake Wales restaurant. Courtesy of State Library of Florida, Ephemera Collection and the Florida Memory Project.

Centuries later, a man parked his car at the bottom of Spook Hill so he could go fishing. As he headed toward the lake he glanced back at his vehicle and it was traveling backward uphill even though he did not leave the motor running.

As the story goes, the man cried out, "Dem’s spooks" before he fainted. That’s how Barney’s Tavern said Spook Hill acquired its name.

The restaurant’s leaflet goes on to state the angler unknowingly had stopped his car, which was said to have the weight of 16 dead men, on top of Vanilla’s unmarked grave, awakening the pirate from his eternal slumber. Vanilla called out to Sarsaparilla for help and the captain rose from his underwater grave and pushed the car off of Vanilla’s final resting spot.

Now, anyone who tries to park their car at the bottom of Spook Hill is pushed away by the ghost of Captain Sarsaparilla. 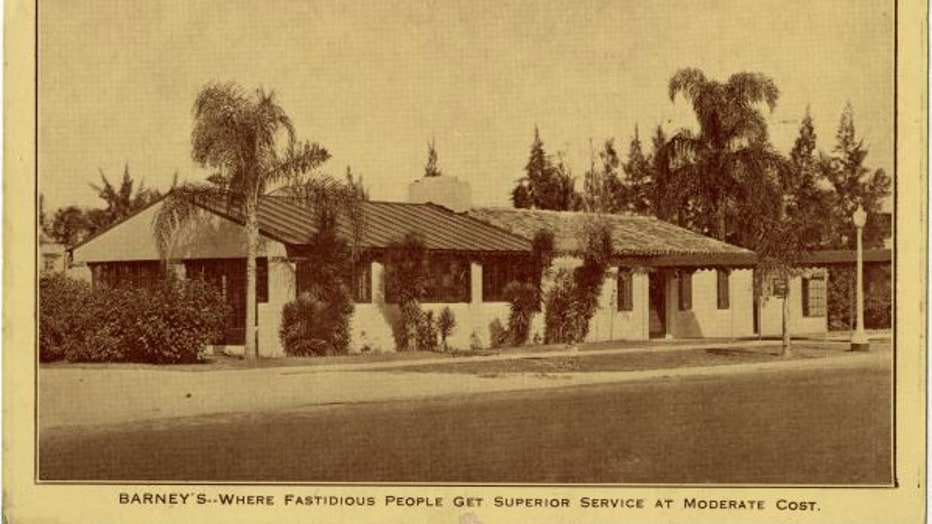 How does Spook Hill work?

To feel the thrill of Spook Hill, take a drive down Fifth Street in Lake Wales between Burns Avenue and Spook Hill Elementary School, whose mascot is ‘Casper the Friendly Ghost’. On the right, you will see a ghost with a sign explaining one of the legends of Spook Hill. Straight ahead you will see the road dip down and then up with the famous Spook Hill arch above and a white line painted on the street below.

Drive to the white line painted in the middle of the road beneath the arch and put your car into neutral.

"There is no great reason why it is there except that it is a roadside attraction and there was an optical illusion," Hannah shared.

Despite it being a free tourist attraction, Spook Hill is located on a road that drivers use regularly on their daily commute, so be careful when stopping your car at the white line.

What is a gravity hill?

According to Visit Central Florida, Spook Hill is the only known magnetic hill in Florida and the oldest gravity hill in the country.

Despite the legends and popular folklore, science may explain why cars roll uphill at Spook Hill.

Spook Hill is a gravity hill or an optical illusion that presents visitors with the spooky feeling of driving uphill when they are truly going downhill.

A gravity hill is a place where gravity appears not to work. Researchers say gravity hills are just an optical illusion. Depending on the area’s landscape, a small downhill slope may appear to be going uphill. Cars can be seen rolling uphill against the gradient of the road. 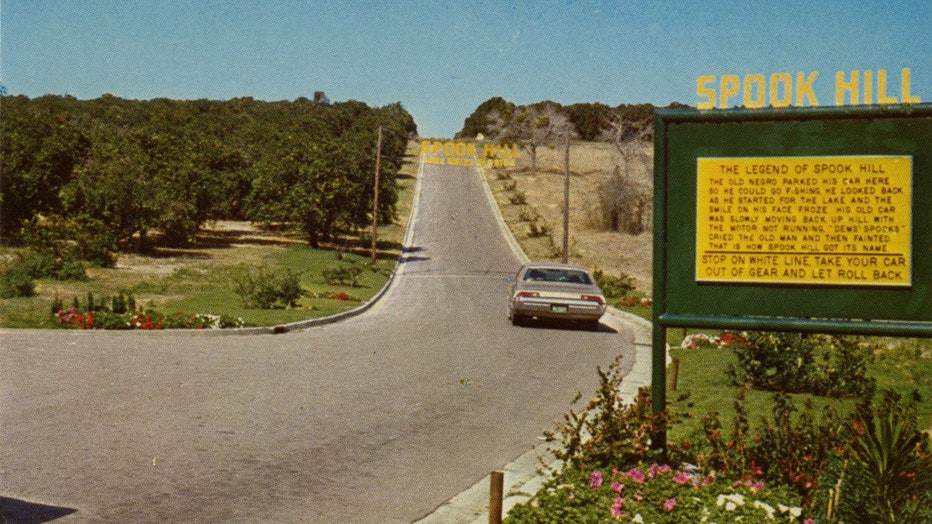 Car rolling "up" the Spook Hill attraction in Lake Wales in 1970. Courtesy of the Florida Memory Project.

According to Geography Realm, one of the most important features of a gravity hill is that the horizon line is partially or completely blocked, which blurs a viewer’s perception of up and down.

"When you’re driving at a highway speed for a long period of time and you get off of that highway, you continue going a little faster than you should. So, if you happen to be in an area that’s a little bit higher, you just get that sense of it being a little bit higher or the gradients are a little different to your perception," Hanna explained. "That’s one of the reasons I think it looks like that."

Spook Hill gained popularity in the 1950s and was added to the National Register of Historical places in 2019.

For more than 70 years, tourists have made a point to take the back roads and venture into Lake Wales to feel their car roll uphill at Spook Hill. 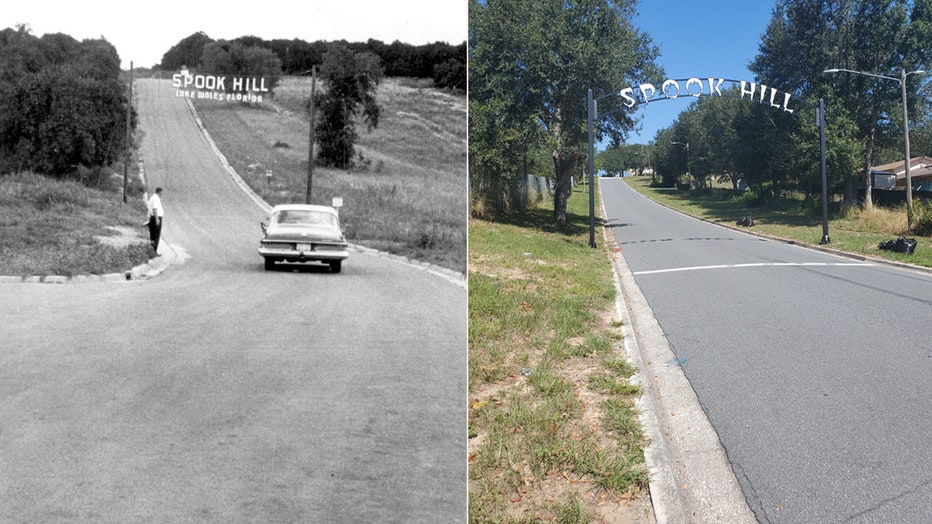 "We’re not saying a million plus or anything visit the area, but I think the way things are going of course, today people want to harken back to that nostalgic time period when everything was hunky-dory," Hanna shared. "That kind of really screams Americana and that traveler-type spirit, discovery and hey, I just saw the world’s largest pistachio, the world’s largest frying pan, ball of twine, things like that. It’s the oddities that you find comfort in I guess."

Is an alligator seeking revenge? Perhaps a chief is protecting his land. Possibly two pirates are trying to keep people from parking on their burial ground. Or maybe it’s simply the force of gravity.

Many theories try to explain the thrill of Spook Hill, but it is something that needs to be experienced first-hand. Head out to Lake Wales, stop on the white line on Fifth Street and give it a try - if you dare.