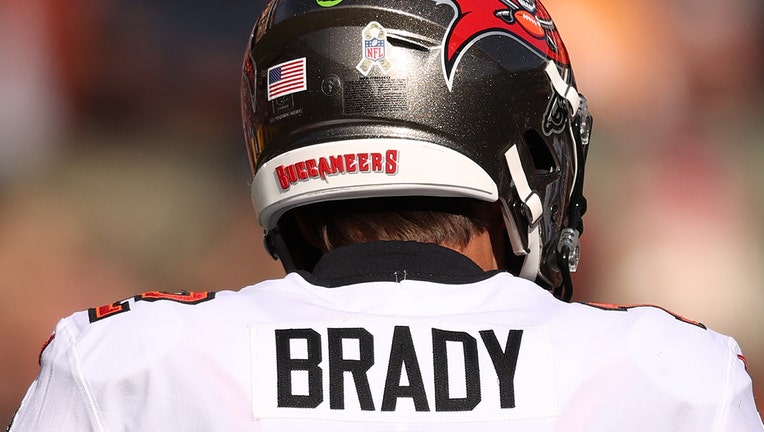 LANDOVER, MARYLAND - NOVEMBER 14: Quarterback Tom Brady #12 of the Tampa Bay Buccaneers looks on against the Washington Football Team at FedExField on November 14, 2021 in Landover, Maryland. (Photo by Patrick Smith/Getty Images)

TAMPA, Fla. - One of the perks of winning as much as Tom Brady has during an unmatched NFL career is rarely having to answer questions about prolonged stretches of losing.

Brady is on pace to set personal bests in yards passing and touchdowns but is also coming off a pair of losses at New Orleans and Washington in which he and a usually stout Tampa Bay defense were not at their best.

The only time the 44-year-old quarterback has lost as many as three consecutive starts were 2002 — Brady’s first season as a full-time starter with the New England Patriots, who endured a four-game skid on the way to a 9-7 finish.

The Bucs (6-3) haven’t celebrated a win since dominating the Chicago Bears 38-3 on Oct. 24. That’s a nearly month-long stretch that includes the team’s bye week.

Brady, who has more regular season (236) and postseason (34) wins than any player in league history, is unaccustomed to such droughts.

"It feels like most teams when you don’t win. It’s not nearly as fun putting all the work in and us trying to grind and get it right," Brady said in response to a question about how the past three weeks have felt for the reigning Super Bowl champs.

"We’re not doing what it takes on the field in order to win. In order to do it right, you put in a lot of time and energy and detail into what we’re doing," Brady added. "It will feel a lot better when we win. But we have to go earn it, and we’re going against a team that challenges you to do it."

READ: Tom Brady is better in year two, but are the Buccaneers?

The Giants (3-6) have won two of their past three games following a 1-5 start and are excited about the prospect of injured running back Saquon Barkley returning to the lineup for the first time in more than a month.

Brady has thrown for 2,870 yards and 27 touchdowns vs. seven interceptions. Four of those picks came in the past two games, contributing to losses in which costly penalties and an inability to get off the field on third downs defensively also undermined Tampa Bay’s chances.

The quarterback was asked if he’s ever tempted to remind people that just like every player in the NFL, he’s capable of having bad games.

"I prefer to just win and just erase that from people’s mind," Brady said.

Antonio Brown is an example of what's plaguing the Bucs right now. Brown is one of eight starting players that have missed time this season due to injury.

"I have great teammates and a great group of coaches and we’re going to work to get it right. ... I think the expectations are high for a reason because we have a lot of talented players, and we know that we can play at a high level," he added. "We just have to go do it."

Tampa Bay also had a two-game losing streak last season, Brady’s first with the Bucs. It finished a stretch in which the team lost three of four, dropping to 7-5 heading into an early December bye.

Brady not only rebounded to avoid a three-game skid, but Tampa Bay went 8-0 the rest of the way.

The quarterback is confident the defending champs will play better, beginning Monday night against the Giants, who played Tampa Bay tough in a two-point, prime-time loss to the Bucs last season.

"Winning football is about doing the right thing as often as possible, everyone being on the same page, great communication and just giving the best effort as possible on every play," Brady said.

"Things aren’t always going to be perfect out there, but you have to have as few mistakes as possible. I think there’s a real urgency for us to have it right," he added. "We played this opponent last year and they gave us a big challenge. ... It’s going to be a big challenge for us, and we have to get back to playing the way we’re capable of playing."