The Piney Point site dates back to the 1960s, when developers envisioned a phosphate mine and an oil refinery. The refinery was never built, but there has been no shortage of controversy since then, Lloyd Sowers reports.

PALMETTO, Fla. - A coalition of environmental groups filed a federal lawsuit Thursday alleging that Florida and other defendants have long mishandled a former phosphate-plant site where massive amounts of contaminated water were released this spring to avert a potential catastrophe.

The groups want a federal judge to require the state, property owner HRK Holdings, LLC, and the Manatee County Port Authority to "abate the present imminent and substantial endangerment to health and/or the environment" at the Piney Point site.

The lawsuit said about 215 million gallons of wastewater were discharged from the Manatee County site into Tampa Bay because of fears about a potentially catastrophic breach of a reservoir. It said the discharges, in part, contribute to harmful algae blooms.

"Defendants’ past and present handling, storage, treatment, transportation and disposal of solid and hazardous waste at Piney Point may, and does, present an imminent and substantial endangerment to health and the environment," said the 78-page lawsuit filed in federal court in Tampa by the Center for Biological Diversity, Tampa Bay Waterkeeper, Suncoast Waterkeeper, Manasota-88 and Our Children’s Earth Foundation.

RELATED: Who's to blame for the Piney Point wastewater mess -- and its $200M price tag?

The Piney Point site includes hazardous phosphogypsum stacks, a byproduct of phosphate production, that are covered by ponds of wastewater, the lawsuit said. Concerns stemming from leaks led in April to massive water discharges into Tampa Bay, evacuation of nearby residents and the declaration of a state of emergency.

After the potential catastrophe was averted, the Legislature in April set aside $100 million in federal coronavirus relief money to clean up the site. Appearing Thursday in Tampa, Gov. Ron DeSantis vowed to fix the problems.

"Obviously, it was operated by a private company, but you know, our view is we're going to fix it," DeSantis said. "This has been an issue for decades. And when this happened, I said, ‘You know what, given the history here, let's just move on and deal with it. Because there's always reasons, there's always other priorities, I get it. So, we secured $100 million to do it. And so that will happen."

But the lawsuit, which is based on a federal law known as the Resource Conservation and Recovery Act, contends that the state has played a key role in mismanagement of the site over the past two decades. 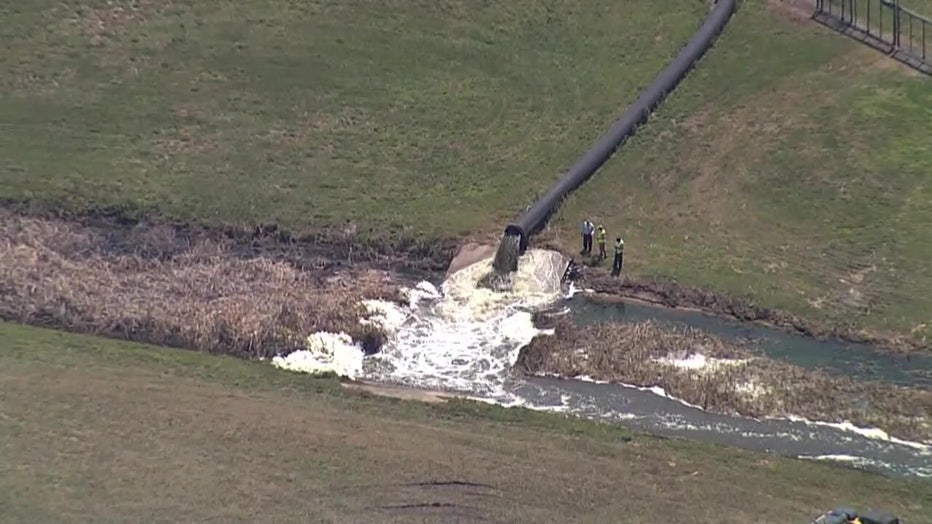 The site operated as a phosphate plant from 1966 to 1999, with the state Department of Environmental Protection becoming owner in 2001 after the Mulberry Corp. filed for bankruptcy, according to the lawsuit. A subsidiary of the company operated the site before the bankruptcy.

HRK Holdings became owner in 2006. But the lawsuit alleges continued mishandling by the Department of Environmental Protection, including by allowing the Manatee County Port Authority to dispose of dredged material at the Piney Point site. The lawsuit said discharges also were needed in 2011 after a breach in an underwater liner.

"Piney Point was and still is a ticking time bomb," Justin Bloom, founder and a board member of Suncoast Waterkeeper, said in a prepared statement Thursday. "Rather than closing it when they had the chance, FDEP (the Department of Environmental Protection) allowed the site to become even more dangerous, knowing full well the risk of collapse and catastrophic contamination."

HRK Holdings released a lengthy statement in April that defended its handling of the site.

"To insinuate that HRK has done anything other than what was required of and allowed by the state of Florida under authority of the numerous agreements and projects undertaken by the company is preposterous," the statement said. "Rather, since the 2011 liner system breach and the costly repairs and site remediation caused by that event, HRK has proposed numerous solutions to dispose of historically retained (phosphate) process water at the site, properly repair the faulty synthetic liner system, and adequately complete the site closure being conducted by FDEP at the time HRK purchased the site."