Pandemic’s impact on Florida after 1 year

One full year of COVID-19 in Florida has put so many extra miles on nurses, doctors, essential workers, and everyday people.

TAMPA, Fla. - It’s been one year since the novel coronavirus appeared in the Sunshine State from another continent -- and quickly changed the world.

Monday marks one year since Florida announced its first two cases of COVID-19, and both patients were in the Bay Area.

The cases included an adult from Hillsborough County who traveled to Europe, where the virus was quickly spreading at the time. The second case was a man from Manatee County with no history of foreign travel.

In March 2020, Kaelyn Sheedy told FOX 13 she visited Spain, France and Italy, which was one of the hardest-hit nations at the time, before she began feeling symptoms.

Hillsborough County’s first coronavirus patient says she’s fully recovered and has been cleared by the Florida Department of Health.&nbsp;

"My first two days with the fever, my eyes were like burning out of my head," recalled Sheedy, who was 29 at the time.  "I continued to have a fever and my cough turned into a wet cough immediately. I started having upper-respiratory issues breathing."

Meanwhile, a man, who was not identified, was diagnosed at Doctor’s Hospital of Sarasota. It was unknown how he was exposed since he did not recently travel abroad.

It’s been one year since Florida’s first known case of COVID-19, unrelated to travel or exposure, was diagnosed at Doctor’s Hospital in Sarasota.

In both cases, they made a full recovery.

At the time, Gov. Ron DeSantis issued a public health emergency, and the months since have been nothing less than a roller coaster. It was and has been a developing situation as experts and leaders learn about the virus and adapt.

On St. Patrick’s Day, Florida announced all bars and nightclubs must close to slow the spread of the coronavirus, with certain breweries eventually reopening.

To-go cocktails were allowed to help keep businesses afloat, but it could be a permanent fixture in Florida as state legislators recently filed a bill to keep it around.

READ: Alcohol to-go may be here to stay in Florida

Restaurants were told to operate at 50% capacity and seating must be staggered. DeSantis also said beachgoers must meet in groups smaller than 10.

On April 1, DeSantis issued a stay-at-home order. Florida was one of the last states to do so.

On June 3, DeSantis announced the state would move into its phase two of reopening, and bars were allowed to reopen, but it was short-lived as cases spiked. Bars and breweries were forced to close again in late June.

By mid-September, bars and breweries were allowed to reopen.

A few days later, during a press conference from downtown St. Petersburg, the governor ended the capacity cap for restaurants and moved onto partial Phase 3 reopening. He issued an executive order that prevents local governments from requiring businesses and restaurants to operate below 50% capacity indoors, or re-closing businesses.

WHY IS THERE NO TOILET PAPER?

As concerns over the coronavirus grew, it fueled panic-buying, leaving many stores with empty shelves – especially in the cleaning-supply aisles.

It led many stores to impose limits on specific items consumers were buying, including toilet paper. Stores also stopped accepting returns on high-demand items, like water. 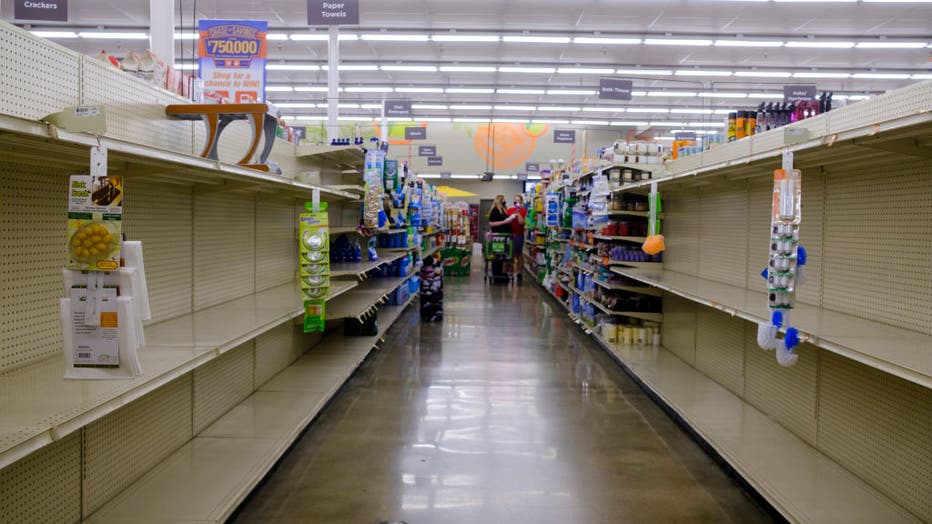 Toilet paper shelves are empty at a Save Mart supermarket during the Covid-19-Coronavirus emergency in Porterville. (Photo by Jeremy Hogan/SOPA Images/LightRocket via Getty Images)

"On the one hand, [the response is] understandable, but on the other hand it's excessive," Steven Taylor, a clinical psychologist and author of "The Psychology of Pandemics," said last year.

At the time, there was little information on the coronavirus. Also, there was no vaccine.

"People, being social creatures, we look to each other for cues for what is safe and what is dangerous," he said. "And when you see someone in the store panic-buying, that can cause a fear-contagion effect."

PREVIOUS: 'Do not call 911 just because you ran out of toilet paper', Oregon police say

Many consumers ended up buying in bulk so they wouldn’t need to come back for some time. Taylor said purchasing a large amount gives people a sense of control over their situations, releasing some pent-up anxiety.

"People become anxious ahead of the actual infection," Taylor said. "They haven't thought about the bigger picture, like what are the consequences of stockpiling toilet paper."

TO CLOSE OR NOT TO THE CLOSE BEACHES?

In March, local officials were criticized for leaving beaches open after several images showed people were packed on the sandy shores, specifically in Clearwater Beach. Most counties eventually closed their beaches.

Other high-profile beaches in South Florida, including Miami Beach, were closed by a state order as the region was considered a hard-hit area at the time.

Ever since Pinellas County shut down its beaches, the popular gathering areas have been eerily empty. SkyFOX Drone gives a view of the beaches from St. Pete Beach to Clearwater Beach.

School campuses were closed on March 16, and distance learning continued through the rest of the school year.

The order sparked lawsuits and a showdown between Hillsborough County school officials and the state.

But lawyers representing Gov. Ron DeSantis, Corcoran and state education officials, who were defendants in the case, maintained that the Constitution also requires the state to provide "high-quality education" to Florida schoolchildren.

A Leon County circuit judge sided with the teachers' unions, accusing the state of ignoring the Florida Constitution.

In late November, DeSantis announced virtual learning will remain an option for the second semester.

The state never issued a statewide order to require masks, but the Florida Department of Health encourages it for those in public.

While it has sparked intense debates, local municipalities have gone through their own journey on requiring face-coverings or not.

Most recently, Tampa city officials were deciding whether to penalize bars in Ybor City that violated COVID-19 safety measures, such as allowing unmasked patrons to crowd around bars.

An executive order handed down by DeSantis in September does not exempt businesses from local mask mandates.

FROM THE STANLEY CUP TO THE SUPER BOWL

The Tampa Bay Lightning were inching closer and closer to finally winning the Stanley Cup. They finally did, but in Canada.

Fans back in Florida were seen storming Thunder Alley to celebrate, and -- in true Florida fashion -- a boat parade was held to celebrate the team’s success.

This hockey season, the Lightning decided to exclude fans in Amalie Arena, but that could change soon.

2020 a year of losses for businesses relying on sporting events

No sports meant a huge loss in revenue for businesses. When Tampa Bay sports teams do well, they're not the only ones who win.

Meanwhile, the Tampa Bay Rays are allowing some fans to attend their spring training games, in which most of the tickets were quickly taken when they went on sale.

It’s not a complete surprise, considering their World Series run last season. None of those games were played at the Trop due to the pandemic.

Back in September, DeSantis pitched for Super Bowl LV to have a stadium filled to capacity, but that didn’t happen. Instead, the NFL allowed only 22,000 fans, 7,500 of whom were vaccinated health care workers. Cardboard cutouts of fans were used to fill empty seats.

It was an exciting time considering the Tom Brady-led Buccaneers qualified to play the championship game in the city that was hosting the Super Bowl – a first in NFL history.

Then they won the big game, leading maskless fans to fill the streets from Ybor City to South Tampa.

A boat parade was also held for the Buccaneers, where fans were encouraged to practice social distancing along the Riverwalk.

Bucs QB Tom Brady threw yet another perfect pass -- but this time, it was the Lombardi Trophy that he tossed to teammates in another boat in the middle of the team's Super Bowl victory parade along the Hillsborough River.

PREVIOUS: A look back at the Buccaneers’ impressive run to Super Bowl title

"I very much doubt it has to do with vaccinations," USF Health’s Dr. Thomas Unnasch says. "I think it has to do possibly with good behaviors. If you look at the events, they were pretty well placed and people we behaving themselves, wearing masks, and social distancing."

Before Christmas, the FDA approved the first COVID-19 vaccine for the U.S., from Pfizer.

At that point, Florida had more than 1.1 million coronavirus cases since the virus took hold, and nearly 20,000 residents had died.

Less than a week later, the FDA approved the emergency use of Moderna's vaccine, and Florida was expected to receive 367,000 doses.

READ: More than half of Florida seniors vaccinated for COVID-19

On Friday, the CDC signed off on Johnson & Johnson’s single-dose vaccine. DeSantis said he expects the state to receive as many as 175,000 doses.

For months, DeSantis has emphasized his "Senior First" approach in getting as many elderly Floridians vaccinated before expanding access to other groups.

So far, more than half of Florida’s seniors have been vaccinated for COVID-19.

On Monday, the governor announced sworn law enforcement officers, firefighters and K-12 school personnel who are 50 and over can start receiving the vaccine as well.